Update Required To play the media you will need to either update your browser to a recent version or update your Flash plugin.
By VOA
03 September, 2014
51VOA听写整理，转载请注明出处。文本已经校对，欢迎纠错！

In Vietnam, two members of a family of street vendors(street sellers) are finding a way to help the poorest students in Hanoi. Pham Minh Dap and his brother are providing the students with mostly free English and Japanese lessons at a learning center they created. The men want to help people who would not normally have a chance to learn a foreign language.

Some education experts in Vietnam say such knowledge may help college graduates get jobs. The country's economy has improved. But many graduates continue to have a hard time finding employment. Local media report 10 percent of university graduates do not have a job. 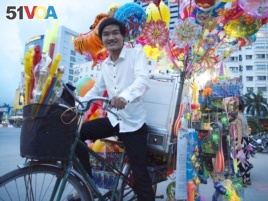 Earlier this year, 24-year-old Pham Minh Dap and his brother established a school they call Stand By You. Volunteers teach poor students English and Japanese. Many classes are free. Students with some language knowledge pay 25 to 50 cents per class.

Mr. Dap pays about $500 to rent the language center space and for other costs. He gives about $150 from his earnings as a street vendor and private language teaching. His brother gives the same amount from money he earns as a secretary. Friends provide the rest.

Mr. Dap says students come to the city from the countryside and must pay for food or rent. He says the students' parents are farmers. And he said farmers are very poor in Vietnam.

But Pham Minh Dap is also poor. He sells balloons and children's toys outside Hoa Binh Park in the center of Vietnam's capital. He works there for a few hours on most afternoons. He earns about $5 each day. Mr. Dap and many of his family members have sold things in the area for 5 years. They come from a village of rice farmers in Thanh Hoa Province.

24-year-old Pham Thi Trang is one of 600 students at the language school. She is finishing her university studies. Her parents work in a market in a village in Ha Nam Province. She says life is hard in the city.

She says she earns about $50 a month from a part-time job, and her parents give her $75. But this is not enough to live on. She has said she has to be very careful with money, so she can pay her bills.

Demand for the school is growing. About 1,000 people are on a waiting list to enter. 10 people have offered to teach for free. And Mr. Dap says he is hoping to raise money to pay for a bigger place. He wants to open more classes.