Free Trade an Important Issue in US Elections

Update Required To play the media you will need to either update your browser to a recent version or update your Flash plugin.
By Christopher Jones-Cruise
03 August, 2016


An international free trade agreement has become an important issue in the American presidential election.

The agreement appears to be a big issue in what political watchers consider "swing states." These are states that move from the Democratic Party to the Republican Party, or back the other way, from one election to the next.

The trade agreement is called TPP, short for the Trans-Pacific Partnership. Officials from 12 countries negotiated the treaty. Those countries control 40 percent of the world economy. 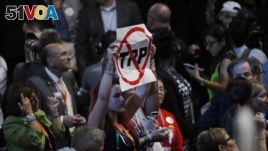 A delegate holds an anti-Trans-Pacific Partnership (TPP) trade agreement sign during the first day of the Democratic National Convention in Philadelphia, July 25, 2016.

Last week, Sanders' supporters said the agreement is an example of the way government policies have ignored American workers. His supporters demonstrated against the TPP at the Democratic Party's national convention in Philadelphia, Pennsylvania.

Guy Anthony is a retired machinist and labor union organizer from Pennsylvania. He calls the agreement "an absolute disaster. It's bad for working people," he said.

Anthony was a delegate to the convention. Pennsylvania is on the eastern edge of what is often called the Rust Belt, a region where manufacturing is especially important to the economy.

The Rust Belt has lost many jobs to factories in other countries. Voters in many of the states could play an important role in deciding the presidential election in November.

For the last 20 years, most people in Rust Belt states have voted for Democratic candidates. In 2012, five of the states -- Pennsylvania, Ohio, Michigan, Wisconsin and Iowa -- voted for President Barack Obama, a Democrat.

But this year, in part because of his strong opposition to the TPP and other trade agreements, many people in the Rust Belt are supporting Donald Trump.

Public opinion surveys show Trump has almost as much support throughout the Rust Belt as Hillary Clinton. In some states he has more. If Trump wins some or all of the states, he could become the next president.

One of the most important swing states in the Rust Belt is Ohio. Dennis Kucinich was a member of the U.S. House of Representatives from the state. He is a Democrat and a former presidential candidate. He has opposed free trade agreements for many years. He told VOA that the agreements are among the reasons voters in the state support Trump. He said workers have been "sold out by both political parties."

"Trade agreements have cost this country millions of jobs, lowered the standard of living, knocked down wages, cut benefits and reduced pensions," he said.

Voters in the Rust Belt may also be supporting Trump because of Clinton's support for earlier trade agreements.

Her husband, former President Bill Clinton, signed the North American Free Trade Agreement in 1993. Some experts have blamed the agreement for a loss of jobs.

Susan Hall is a Sanders delegate from Pennsylvania.

"I'm pretty confident she'll flip her position back on it if she becomes president," Hall said.

Clinton representatives say she will not change her position. They note that the TPP does not meet her demands for protecting American workers.

But Trump believes Clinton is only temporarily opposed to the deal.

"We all know (what) is going to happen if she" wins the presidency, he told reporters last week.

But even though many politicians and reporters are talking about the TPP, surveys show that many Americans do not even know what it is.

"I'll bet if we asked a sample of people what the TPP is, a lot would say, ‘toilet paper something,'" he said.

Before the election, many Americans did not know what the TPP was. Ballard said "I think it probably still isn't well-known," even when it is being discussed during the campaign.

Gary Hawley of Wisconsin was a delegate to the Democratic convention. He is a retired carpenter and union member. He says many people in his state may not believe the TPP is an important issue.

"I don't think people know enough about the TPP, and you've got to know about something before you can agree or disagree with it," he said.

VOA's William Gallo reported this story from Philadelphia. It was adapted for Learning English by Christopher Jones-Cruise. George Grow was the editor.

swing state – n. a US state in which the Democratic and Republican candidates both have a good chance of winning (also called "battleground state")

sold out – phrasal verb to do something that does not agree with your beliefs, values, etc., especially in order to make money

standard of living – n. the amount of wealth, comfort and possessions that a person or group has

benefit – n. something extra (such as vacation time or health insurance) that is given by an employer to workers in addition to their regular pay

flip – v. to change; to return to a previous position, opinion or belief

sample – n. a group of people or things that are taken from a larger group and studied, tested, or questioned to get information