Update Required To play the media you will need to either update your browser to a recent version or update your Flash plugin.
By Gregory Stachel
25 December 2021


Volunteers are working along the border of Italy and France to keep migrants from getting killed or injured by the cold and the mountains.

The Alpine Mountain helpers arm themselves with hot tea and hand warmers. They believe that their own humanity would be lessened if they left pregnant women, children, and men young and old to struggle in the weather on their own.

On both sides of the border in the Alps, the effort is based on humanist and humanitarian ideas. It is grounded in local traditions of not leaving people to face the weather alone. It started in 2016 when mountain workers would not ignore the migrants. 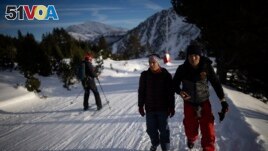 A person skiing, a mountain sport, passes by Afghan migrants Sayed Hamza, left, and Ali Rezaie as they make the crossing through the French-Italian Alps to reach a migrant center in Brian&#231;on, France on December 12, 2021. (AP Photo/Daniel Cole)

The aid grew to hundreds of volunteers. They run migrant shelters, clothe those in need for the dangerous crossing, and go out into the mountains. They clear paths in the snow during the day for migrants to follow and wait for them at night to guide them past border police to safety. They also treat them for health problems related to the cold and other medical needs.

"Often, we say, ‘Welcome! How are you?' We speak a bit of English because most people speak at least a bit," said volunteer helper Paquerette Forest, a retired teacher.

She said some do not want the help, but really tired people will say, "Yes."

"We try to avoid being spotted. We wait in the forest if needed. And we sort out vehicles to come and pick them up," she said.

Migrants credit the volunteers for saving lives. The Alps are not as deadly for migrants as the Mediterranean Sea, where many hundreds have died or gone missing this year alone.

"If not for them, we would have died of cold," said Aymen Jarnane, 23, a Moroccan led to safety on a night when the temperature dropped to minus 15 Celsius.

But there have been deaths. Aid groups pushed French officials to provide mountain shelters for exiles and to stop pushing the migrants back into Italy. This happened after a Togolese man died from the cold during an attempted night crossing of the mountains in February 2019.

European opponents of migration argue that aiding exiles gives hope for others to follow. The volunteers however cannot imagine not helping others.

"Some of them have traveled 7,000 or 8,000 kilometers before getting here, so it's not a mountainous barrier that will stop them," said Jean Gaboriau. He is a mountain guide who helps run a shelter near the town of Briancon.

Gaboriau said, "Regardless of skin color, political or religious beliefs, everyone has the right to be saved or simply to be welcomed."

John Leicester reported this story for The Associated Press. Gregory Stachel adapted it for VOA Learning English. Mario Ritter, Jr. was the editor.

humanism – n. a system of values and beliefs that is based on the idea that people are basically good and that problems can be solved using reason instead of religion

bit – n. a little of something

spot – v. to see or notice (someone or something that is difficult to see or find)

regardless –adv. without being stopped by difficulty or trouble