Update Required To play the media you will need to either update your browser to a recent version or update your Flash plugin.
By John Russell
08 January 2023


Rapa Nui, widely known as Easter Island, is a Chilean territory in the Pacific Ocean. The island is home to a French-born artist who is offering beautiful gifts to the island's Roman Catholic Church.

The artist, Delphine Poulain, was born in Paris 52 years ago and has been in love with Rapa Nui since she first visited in 1994. She smiled remembering her decision. "I was riding a horse through the beach when I first ... thought ‘I want to live here,'" she said.

Poulain said she loves the freedom and the peace provided by the island, which is home to about 7,700 people. 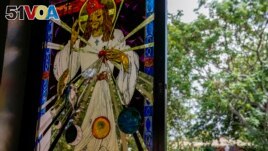 Last year, Poulain offered a gift: stained-glass windows representing important moments leading to and including the crucifixion of Jesus Christ. The windows show the 14 Stations of the Cross. They were a gift to Holy Cross Church in Hanga Roa, the island's main city.

The Rapanui community is mostly Catholic, but its religious activities are mixed with its ancestral beliefs.

The music that people sing during church events describe biblical stories translated to the Rapanui language. The wooden statues that show Christian figures such as the Virgin Mary and the Holy Spirit are unlike Western images. Instead, they were influenced by the art of the islanders' ancestors.

The statue of Mary, near the altar of the church, looks like ancient human figures known as moai. Close to the main entrance, the third symbol of the Holy Trinity is not a dove, but a manutara -- a bird that was considered holy more than 120 years ago.

The Rapanui people are protective of their identity. They sometimes welcome foreigners only if they work to learn about the islanders' culture. On a burial place, or tomb, where the remains of missionary Sebastián Englert are kept, the writing says: "He lived among us and spoke our language."

Poulain said that winning acceptance from the local people was not easy, but she has been patient. Her stained-glass windows were another step. Since she began placing them in the church on December 24, 2021, some Rapanui who did not communicate with her before now wave their hand when they see her pass.

"I have so much respect for the island and the people," she said. "Before I was alone, but now people know my husband and my children."

Poulain's desire to become part of the island is clear in her daily life. Her family lives near the beach on the coast. The color of their house is similar to the color of the area's rocks. The water used at their home is collected from rain. The family uses a solar energy collector for electricity.

When Poulain's family moved here, they only had a tent to protect themselves. Now their house stores many things the island has given them.

The top of the house was built with metal and the rest with wood. The dishes are washed on what used to be the bottom of a bathtub; above the dining room is a light that was once a metal waste can.

"There has been a lot of difficulty, but also a lot of happiness. This was my dream and living your dream is incredible," Poulain said.

Maria Teresa Hernandez reported on this story for the Associated Press. John Russell adapted it for VOA Learning English.

stained glass – n. colored glass that is used to make pictures and patterns in windows

translate –v. to change words from one language into another language

altar –n. a table or raise structure in a church used in Christian religious ceremonies

symbol –n. an object that represents an idea or quality

missionary – n. a person who is sent to a foreign country to do religious work (such as to convince people to join a religion or to help people who are sick, poor, etc.)

tent – n. a portable shelter that is used outdoors, is made of cloth (such as canvas or nylon), and is held up with poles and ropes

bathtub – n. a large and long container in which people take baths or showers