Update Required To play the media you will need to either update your browser to a recent version or update your Flash plugin.
By Dan Friedell
02 December 2022


UNESCO, the cultural organization of the United Nations, voted this week to recognize the importance of the French baguette.

The international experts gathered in Morocco to discuss the French bread and other subjects, including a traditional Japanese dance and the drink called rum from Cuba.

The baguette is a long, narrow tube-shaped bread. It is made of simple ingredients: water, flour, yeast and salt. It dates back a few hundred years in its early form. But, the baguette grew wildly popular during the 1920s and became a staple in French kitchens. 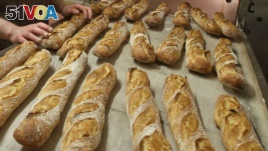 FILE - Baguettes are seen as they come out of the oven of the bakery La Parisienne in Paris, Friday, March 18, 2016. The bread has been recognized by UNESCO. (AP Photo/Michel Euler/File photo)

However, France's cultural agency has warned that the country's bread making tradition is failing. About 400 bakeries have closed every year since 1972, the agency reported.

They said the store's bread, which cost just 30 cents, was not as good as the bread from traditional bakeries where it costs about a dollar.

Marine Fourchier lives in Paris. She said it is easy now to get a bad baguette in the city.

Audrey Azoulay leads UNESCO and formerly served as France's culture minister. She said buying and eating baguettes is a "daily ritual" in France. Ten billion are sold in the country each year.

"It is important that such craft knowledge and social practices can continue to exist in the future," she continued.

Asma Farhat is a baker at Julien's Bakery near the Champs-Elysee in Paris. She said "you can't have a proper meal" without a baguette.

In addition to the rum, the Japanese dance and the bread, UNESCO honored many more traditions in places including Hungary, Greece, Guatemala and South Korea.

ingredient – n. one of the things used to make a food product

ritual – n. an activity that happens daily or regularly

practice – n. something done often, or a usual custom