Update Required To play the media you will need to either update your browser to a recent version or update your Flash plugin.
By Jonathan Evans
06 February 2022


A French beer-making business, or brewery, is using a special kind of bacteria to turn their beer blue.

The beer, sold under the name Line, is an alcoholic drink made by the Hoppy Urban Brew brewery. The brewery was looking for a way to make its drinks different from other kinds of beer. So, the beer maker partnered with Etika Spirulina. It is a business in northern France that wants to popularize its spirulina algae as a dietary aid.

Sebastien Verbeke works at Hoppy Urban Brew. He told Reuters that the beer is selling well. "It's getting an enormous amount of interest and curiosity on the part of the public," he said. 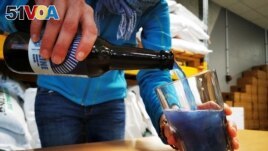 Hoppy Urban Brew (HUB) worker Mathilde Vanmansart pours a bottle of the Line blue beer, made with spirulina algae, into a glass during inside the brewery near Lille, France, January 31, 2022. REUTERS/Ardee Napolitano

The part of the spirulina that gives the beer its blue color is called phycocyanin. It is added to the beer during the beer-making process.

Brewery worker Mathilde Vanmansart described the taste of the beer as hoppy, light, and a little fruity. She added that the only evidence of the added algae was the blue color.

Xavier Delannoy owns the farm that provides the spirulina. He said after several tests, the brewery had found a mixture that pleased buyers.

He said 1,500 bottles of the blue beer were sold between October and December last year. The brewery is now preparing to increase its production to meet demand.

algae –n. a group of very small, single-celled organisms that include plants and bacteria

curiosity –n. the desire to learn more about something or someone