Update Required To play the media you will need to either update your browser to a recent version or update your Flash plugin.
By Christopher Cruise
12 January, 2015


French officials say they are deploying 10,000 troops to places that could be targets of terror attacks. Officials made the decision in response to last week's deadly attacks in Paris. A total of seventeen people were killed. Defense Minister Jean-Yves Le Drian told reporters on Monday that the troops will be guarding the areas by Tuesday night. The Interior Minister said about half of them will be protecting the country's 717 Jewish schools.

The officials spoke after a Cabinet meeting with President Francois Hollande about security. 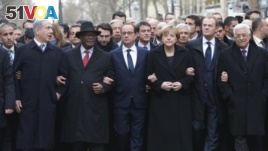 World leaders participate in solidarity march in Paris on Sunday

On Sunday, reports say almost 4 million people gathered in Paris and other cities around France. French officials said it was the largest such gathering in the country's history. More than 40 heads of state and government joined Mr. Hollande in Paris, including the leaders of Britain, Germany, Israel, the Palestinian Authority, Ukraine and Mali. The Russian foreign minister and the U.S. ambassador to France were also at the gathering. 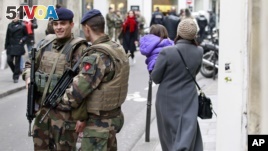 Some media reports have criticized the United States for not sending a high-level official to join the gathering.

U.S. Secretary of State John Kerry will meet with officials in France on Thursday and Friday to talk about ways to fight terror attacks. He said American intelligence officials and the Federal Bureau of Investigation are helping French investigators.

Searchers have found the flight information recorder and the voice recorder from the AirAsia passenger plane that crashed into the Java Sea two weeks ago. Investigators hope the information will help them learn why the plane crashed less than an hour into its planned two-hour flight from Surabaya, Indonesia, to Singapore. All 162 people on the plane died, searchers have found fewer than 50 bodies.

President Park said she would like to restart the process of rebuilding trust. She said talks should center on issues where there is already agreement.

Police raid a prison in Lebanon

Police in Lebanon have raided a prison near Beirut. The raid targeted prisoners who officials say helped plan a deadly bombing Saturday in Tripoli. Lebabon's Interior Minister said police listened to phone calls between prisoners and militants who carried out the attack.

Early Monday, police moved a group of prisoners to another part of the prison.

At least nine people were killed and 37 wounded when two suicide bombers attacked a small restaurant in an area of Tripoli where many people belong to the Alawite religious group. The Nusra Front, which has been linked to al-Qaida, claimed responsibility for the attack.

And in news of the entertainment industry, the movie "Boyhood" was named best dramatic film at the Golden Globe Awards Sunday. Richard Linklater was given the award for best director for the film. It took 12 years to make.

Christopher Cruise wrote this for Learning English from VOA news report. Mario Ritter was the editor and producer.

response-n. in reactions to, as an answer to some action or situation

gathering -n. a meeting , a group of people who have come together for a purpose

center –v. to focus, to be the main subject

Now it's your turn to use these Words in The News. In the comments section, write a sentence using one of these words and we will provide feedback on your use of vocabulary and grammar.