Update Required To play the media you will need to either update your browser to a recent version or update your Flash plugin.
By VOA
27 February, 2013

From VOA Learning English, this is THE MAKING OF A NATION – American history in VOA Special English. I'm Steve Ember.

This week in our series we tell about the conflicts among the nations in Europe during the eighteenth century and how they affected North America.

The powerful European nations already were fighting each other for control of territory and riches all over the world. These small wars continued for more than one hundred years. They were called King William's War, Queen Anne's War, King George's War and the French and Indian War. 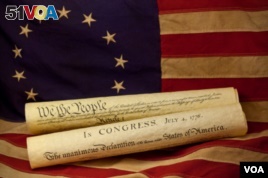 The war began with conflicts over land. French explorers had been the first Europeans in the areas around the Great Lakes and the Ohio and Mississippi rivers. France had sent traders and trappers to these territories and had established trading centers there.

Britain claimed the same land. When the king gave land in North America to someone, the land was considered to extend from the east coast to the west coast -- although no one knew where the west coast was. The land along the east coast had become crowded, and settlers were moving west. White people were destroying the Indians' hunting areas. And Indians became worried that they would lose the use of their land.

The Indian tribes might have been able to resist the people moving west if they had been united. But their own conflicts kept the tribes apart. When Britain and France started fighting each other, some Indians helped the British. Others helped the French.

The French settlers lived mainly in what was called New France. Today it is part of Canada. Life there was different from life in the British colonies to the south. For example, there was no religious freedom. All settlers in French territories had to be French and belong to the Roman Catholic Church. So, many French people who belonged to Protestant groups settled in the British colonies. These French Protestants were known as Huguenots.

France also did not like the fact that the British paid the Indians high prices for animal furs. France was more interested in the fur trade than in settling the land. The British hurt the French traders' business when they bought fur from the Indians.

One of the French trading centers was built in the area where the city of Pittsburgh, Pennsylvania is today. The French called it Fort Duquesne. The British claimed it was in Virginia and – therefore - that the land belonged to them. In seventeen fifty-four, the governor of Virginia sent a twenty-one-year-old colonist named George Washington to tell the French to get out. This was the same George Washington who would later become the first President of the United States.

The French refused to leave Fort Duquesne. So Washington and one hundred fifty men attempted to force them out. They attacked a group of Frenchmen and killed ten of them. The French and Indian War had begun.

British troops under the command of General Edward Braddock joined George Washington at Fort Duquesne. The British general expected to fight the way battles were fought in Europe. There, troops lined up on open fields and fired their weapons as they marched toward each other. The French and Indians did not fight this way. They hid in the woods. They wore clothing that made them difficult to see. They shot at the British from behind trees. The British had more troops than the other side. But the French and Indians won the battle of Fort Duquesne. General Braddock was killed.

Most of the French and Indian War was fought along two lakes in an area of what is now New York state, near the border with Canada. One was Lake George. The other, Lake Champlain north of Lake George. It reaches almost all the way to the city of Montreal in Canada.

These lakes provided the best way to move troops and supplies during the French and Indian war. Few roads existed in North America at that time. The military force, which controlled the lakes and rivers, controlled much of North America.

The French had military bases in the cities of Quebec and Montreal. The British had bases along New York's Hudson River. The area between them became the great battleground.

Fighting increased after the British defeated the French near Lake George in the final months of seventeen fifty-five. The French then built a new base to control Lake Champlain and the surrounding area.

The French base was at the southern end of Lake Champlain. They built a strong camp or fort. They called it Fort Carillon.

The fort would control Lake Champlain and the area needed to reach the northern part of Lake George. The fort was designed to provide a strong defense against attack. The French built two big walls of logs, several meters apart. The area between the walls was filled with dirt. Later, a strong stone front was added. Troops inside the walls were well protected. The British built a similar fort at the southern end of Lake George. They called it Fort William Henry.

France sent one of its best military commanders to take command of its troops in America. His name was the Marquis de Montcalm. General Montcalm attacked several British forts in seventeen fifty-seven. One of these was Fort William Henry on Lake George. The British commander was forced to surrender.

General Montcalm promised that the British troops would be treated fairly if they surrendered. But the Indian allies of the French did not honor the surrender agreement. They began to kill British soldiers and settlers. No one is sure how many people died. It could have been more than one thousand.

In seventeen fifty-eight, a strong British force attacked Fort Carillon on Lake Champlain. General Montcalm was the French commander. Fort Carillon was strong enough that the smaller French force was able to defeat the larger British force. The British withdrew, but attacked again the next year. This time the British commander was General Jeffery Amherst.

Amherst was successful. The British defeated the French. They changed the name of Fort Carillon to Fort Ticonderoga. It became an important military center in the French and Indian War. Fort Ticonderoga would also become important later, during America's war for independence.

The Battle for Quebec was the turning point in the conflict. Britain and France signed a treaty to end the war in seventeen sixty-three. The British had won. They took control of the lands that had been claimed by France.

Britain now claimed all the land from the east coast of North America to the Mississippi River. Everything west of that river belonged to Spain. France gave all its western lands to Spain to keep the British out. Indians still controlled most of the western territory, except for some Spanish colonies in Texas and New Mexico.

Today, you can still visit the two forts that were so important in the French and Indian War. Not much remains of the original buildings. However, both have been re-built using the original designs. The area surrounding both forts is very beautiful, including the two lakes, Lake George and Lake Champlain.

Many people travel to this area to enjoy the outdoors. The area includes one of America's national historical parks, Saratoga. It also includes the Lake George Beach State Park. Few people who visit this calm and peaceful area stop to remember the terrible fighting that took place there two-hundred fifty years ago.

The events following the French and Indian War will be our story next week.

You can find our series online with transcripts, MP3s, podcasts and pictures at 51voa.com. You can also follow us on Facebook and Twitter at VOA Learning English. I'm Steve Ember, inviting you to join us again next week for THE MAKING OF A NATION -- American history in VOA Special English.
Related Articles
go top