Update Required To play the media you will need to either update your browser to a recent version or update your Flash plugin.
By VOA
16 May, 2015


Now, the VOA Learning English program "Words and Their Stories."

Bonjour! Just kidding. We are speaking English. But today we are featuring French words that we use in English.

For example, mayday is an emergency code word. It is used around the world in voice communications. You might see a war movie in which an airplane has been hit by rocket fire.

The pilot gets on his radio and calls "mayday, mayday, mayday" to tell that his plane is in danger of crashing to the ground.

But mayday has nothing to do with the month of May. It comes from the French expression "(venez) m'aider," or "m'aidez," which means "help me."

Frederick Stanley Mockford created the mayday call signal in the 1920s. Mr. Mockford was a radio officer at Croydon Airport in London. He was asked to think of a word that could be used in an emergency. The word had to be easily understood by all pilots and airport workers. Much of the air traffic at that time was between London and Paris. So, he proposed the word mayday. 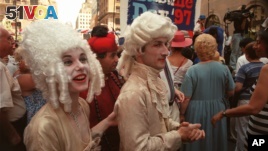 Today, many groups use mayday to mean a life-threatening emergency. The call is always given three times to prevent mistaking it for some similar sounding words.

Many other French words are commonly used in English. One of these is even in the Learning English Word Book. It is sabotage. Sabotage means to destroy or damage as an act of subversion against an organization or nation. A person who sabotages is a saboteur. Bad crime, lovely word.

In economics or politics, you may have heard the term laissez-faire. It means to leave alone and not interfere. It was first used in France in the 18th century.

In the business world, entrepreneur is another French word. It means a person who starts and operates a new business and has responsibility for any risks involved.

Many French words are used in the arts. For example, a film noir is a movie about murder and other crimes. These films were popular in the 1940s and 50s. Anything in art, music or literature which is very modern or ahead of its time is called avant-garde.

In the arts or any industry you prepare a résumé if you are looking for a job. A résumé documents your education, skills and experience. While every professional needs a résumé, each one is unique. In other words, each is one of kind.

Food is not unique to France, but the French are famous for their food. So, it makes sense that many cooking terms we use in American English are French. All cooks need to know how to sauté. This is frying something quickly in a small amount of oil or butter.

Flambé is a technique by which alcohol is added to a dish and then lit on fire. This is both for effect and to burn off the alcohol. When you are eating at a restaurant, the server may tell you bon appétit, which means good appetite, or enjoy your meal.

And if you go away, someone may wish you bon voyage or have a good trip. This program was written by Shelley Gollust. I'm ­­­­­­­­­­­­­­­Kelly Jean Kelly.

And I'm Anna Matteo. You can find more "Words and Their Stories" at our Web site, 51voa.com.