Update Required To play the media you will need to either update your browser to a recent version or update your Flash plugin.
By Susan Shand
02 September 2021


Declared dead by a French court in 2017, Jeanne Pouchain has spent the past four years trying to prove she is alive. French officials, however, disagree.

She cries at times when explaining her story and what she plans for when she will officially be "alive" again. 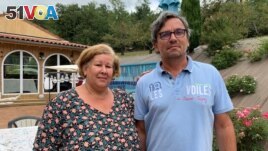 Jeanne Pouchain poses with her husband Pierre-Jean Pouchain during an interview with Reuters at her home, detailing the ordeal she has been leaving through since being declared dead by a judge, in Saint-Joseph, near Lyon, August 30, 2021. (REUTERS/Cecile Mantovani)

It all started, Pouchain said, when the family received a letter four years ago from a court saying mistakenly that she was dead. The letter also said she owed money that her husband had to pay.

The letter was part of a legal process launched by a former employee of Pouchain's cleaning business.

It has not been easy or quick to fix the mistake.

Pouchain is unable to work and afraid to leave her house because she does not have an identification card or social security number. She lives as a recluse.

Some of the family's belongings were taken by the courts and all their saved money has gone to trying to get things back to normal.

She spoke to Reuters in the house she shares with her husband Pierre-Jean in a small village near Lyon, in south-east France.

Now, the courts are looking at her case again. Pouchain and her husband have begun to have some hope. But it will still take months. The courts must overturn their decision, and a judge must recognize officially that she is not dead and never was.

She has great dreams for that day.

"I know exactly what I will do...I will get a health check, because I know some things are wrong with my body," she said.

She said that she could not see a doctor because she does not have a social security number. She has several health problems, including having lost most of her teeth.

Her other dream is simply to be able to enjoy life again, at home, with her husband, Pierre-Jean. He is sure things will be put right.

"Hope is what makes us carry on," he said. "Eventually, the outcome will necessarily be in our favor."

recluse – n. a person who lives alone and avoids other people

dentures – n. (pl.) a set of manufactured teeth to replace lost natural ones

eventually –adv. at some later time