From Education to Bitcoin, New Restrictions in China

Update Required To play the media you will need to either update your browser to a recent version or update your Flash plugin.
By Alice Bryant
01 August 2021


For months, China has been increasing restrictions on private companies operating in the country. Here are the industries facing new measures: 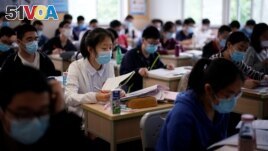 Students wearing face masks are seen inside a classroom during a government-organized media tour at a high school as more students returned to campus following the coronavirus disease outbreak, in Shanghai, China May 7, 2020. (REUTERS/Aly Song)

China's competitive higher education system has made tutoring services very popular with parents. Private tutoring is a $120 billion industry in the country and includes several companies based overseas. But to increase the nation's slow birthrate, the government has been trying to lower the cost of raising children.

In November, China's banking regulators put out draft rules calling for stronger controls for online lending. The company Ant Group is a major lender. Ant Group is a part of the larger Alibaba Group, a Chinese company specializing in technology, finance and online product sales.

The rules set limits for online loans between provinces and put a limit on loan amounts for individuals.

In April, the regulator demanded that Ant Group separate its payment business from its personal finance business.

Regulators have also cracked down on traditional online commerce, or product sales.

In April, the State Administration of Market Regulation fined Alibaba Group $2.75 billion. It was the company's highest fine yet. The regulator says Alibaba had been preventing its product sellers from selling their goods on other websites.

The regulator has also fined smaller companies for their practices related to consumer rights and labor.

In May, it fined the company JD.com 300,000 yuan for publishing false information about its food products. JD.com is a major competitor of Alibaba.

At first, the regulator named violations of consumer privacy as a reason for barring new riders. Later it put out separate draft rules for other Chinese companies to run a security check before listing stocks overseas.

A CAC investigation led to a fine of 500,000 yuan for Didi and other companies for not reporting their takeovers of smaller companies.

In May, three financial regulators widened rules on China's cryptocurrency industry. They barred banks and online payment companies from use of cryptocurrency for payment or legal settlement.

They also barred companies from providing exchange services between cryptocurrencies and national moneys, among other rules.

In the following weeks came measures from provincial governments to prevent bitcoin mining.

Those measures caused a series of mining closures around the country. Chinese newspaper Global Times predicts that 90 percent of mining operations will soon close.

China's economy has improved after a drop in 2020 due to the coronavirus pandemic. Officials have increased efforts to stop real estate companies from borrowing too much money this year.

Other regulatory measures include borrowing limits for property developers and limits on property loans from banks.

Some experts say the gaming industry is next to face tough regulations. China's central government has continued to express concern about gaming addiction among young people.

The government will likely target the many games being published without official permissions, or ones that misuse user information. That prediction comes from Rich Bishop. He is a chief executive of the Beijing-based app publisher AppInChina.

In healthcare, last month the State Council urged a reduction in medicine prices for 2021. It also demanded changes to the country's complex healthcare system.

tutoring – n. the act of teaching a single student

fine – v. to make someone pay an amount of money as punishment for breaking the law

cyberspace – n. the online world of computer networks and the Internet

stock – n. a share of the value of a company which can be bought, sold, or traded as an investment

cryptocurrency – n. a form of digital money that is not regulated by a central bank and whose records are stored in an encrypted computer database