From Epidemic to Pandemic to Endemic

Update Required To play the media you will need to either update your browser to a recent version or update your Flash plugin.
By Hai Do
27 September 2021


The World Health Organization (WHO) declared the coronavirus crisis a "pandemic" on March 11 of 2020. The WHO's Director-General Tedros Adhanom Ghebreyesus said that day, "Pandemic is not a word to use lightly or carelessly." He was reminding people that the word is used only for the most extreme and dangerous spreads of disease.

Since the start of the pandemic, Johns Hopkins University reports, there have been more than 228 million confirmed cases of COVID-19 among the almost eight billion people on the planet. The number of deaths from the disease is about 4.7 million.

At the same time, new versions, or variants, of the SARS-CoV-2 virus that causes COVID-19 are developing and spreading very fast. In the United States, the Centers for Disease Control and Prevention (CDC) said the Delta variant is the main cause of new COVID infections. 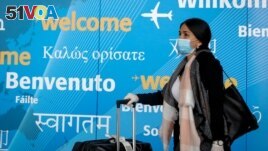 Governments and health officials around the world reacted to the crisis by establishing the largest vaccination program in history. Data collected by the Bloomberg company shows that by September, more than 5.9 billion shots of vaccine have been administered to people across 184 countries.

Many scientists, however, believe that the new coronavirus is here to stay. The science publication Nature recently reported the results of a poll it did with more than 100 scientists. Eighty-nine percent said they believed SARS-CoV-2 virus will become endemic, meaning it will continue to exist in some areas for years to come.

Michael Osterholm is an expert on epidemics at the University of Minnesota in Minneapolis. He told Nature that ending the existence of the virus right now is unrealistic. He compared it to trying to build "a stepping-stone pathway to the Moon."

The World Health Organization defines pandemics, epidemics, and endemics based on a disease's rate of spread.

For example, the Ebola outbreak that spread within West African countries from 2014-2016 was called an epidemic.

In 2016, the world's health agency declared that the Zika virus was a "Public Health Emergency of International Concern." The insects called mosquitos pass the disease to humans when they bite them. Zika was first discovered in Africa and Asia before spreading to Brazil and other South American countries.

Some considered Zika an epidemic while others view it as a pandemic like the current coronavirus health crisis.

The difference between an epidemic and a pandemic is not in the severity of the disease, but the degree to which it has spread. A pandemic means a disease has spread to several countries around the world. Epidemic is used to mean disease spreads in smaller areas.

Researchers from Columbia University's School of Public Health wrote, "while an epidemic is large, it is also generally contained or expected in its spread, while a pandemic is international and out of control."

From pandemic to endemic

The word endemic came from the Greek word endēmos, meaning "in the population." In public health, it is used to describe a disease outbreak that is present and limited to an area. This makes the disease spread and rates easier to control.

Malaria, for example, is considered an endemic in many warm, wet areas across countries in Asia, Africa, and South America. The H1N1 influenza virus is also endemic.

More than one-third of the scientists Nature polled thought it would be possible to end the COVID-19 pandemic from some countries while it continued to exist in others.

Christopher Dye studies epidemics at Britain's University of Oxford. He said, "I guess COVID will be eliminated from some countries, but with a continuing (and maybe seasonal) risk of reintroduction from places where vaccine coverage and public-health measures have not been good enough."

Laura Herrero and Eugene Madzokere are researchers from Australia's Griffith University. They wrote about the disease in the online news site The Conversation. The scientists said that with face coverings and vaccination, the COVID-19 pandemic "could disappear like smallpox or polio did...." But they said the disease could also become endemic over time.

They said viruses are more likely to become endemic if they are adapted to "a local environment" of people with "low or zero immunity." And vaccination rates will affect the progress of the disease. A low vaccine rate could permit the virus to continue at an epidemic level for longer, they wrote.

The scientists said once we see an unchanging level of SARS-CoV-2 passage in an area, we will know the pandemic has ended and the virus is endemic.

Hai Do wrote this story for VOA Learning English. Caty Weaver was the editor.

guess - v. chiefly US, informal. to suppose or think (something) — usually used following the pronoun I

eliminate - v. to remove (something that is not wanted or needed) : to get rid of (something)

reintroduce - v. to return (an animal, disease, or plant) to the area where it used to live