From Honduras to the US, a Migrant Story

Update Required To play the media you will need to either update your browser to a recent version or update your Flash plugin.
By Hai Do
06 December, 2018


Haydee Posadas had been waiting eight years for her son to come home.

Wilmer Gerardo Nunez left Honduras for the United States in 2010. He was 35 years old. He left his home because of gang threats, just as thousands of other people have done.

Posadas told the Associated Press, "I am between a rock and a hard place...I know nothing about my son, whether he's dead or alive."

Posadas is not alone. The AP found that almost 4,000 Latin American migrants have died or gone missing along the same route in the past four years. The news agency says the real numbers might be even higher, because families may not report missing family members who were migrating illegally. 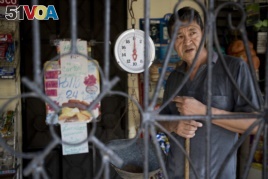 In this Oct. 31, 2018 photo, store owner Carlos Alfonso Garcia looks out from behind his iron gate in the Ciudad Planeta neighborhood of San Pedro Sula, Honduras. The bars that hem in nearly every porch in one of the most dangerous neighborhoods.

Posadas' son left home for the United States for the first time in the 1990s, when he was 16. Posadas had just lost her factory job. Nunez would send money back home to help. He would call her almost every day.

Nunez was deported two times but returned to the United States each time. In 2007, he had a child with a Mexican woman, Maria Esther Lozano. When Lozano was about to give birth to another child, in July 2010, Nunez was deported for a third time.

Posadas was happy to have her son back home. He would make tasty meals with her. "He cooked better than a woman," Posadas said.

But the family's neighborhood had grown more dangerous over the years. Organized crime moved in. One time, men who claimed to be police locked her daughter to iron bars in the house and shot one of Posadas' grandsons. The men suspected the boy was involved with gangs. Other times there were shootouts in the streets.

In order to survive in the neighborhood, Posadas said, "If you saw it, you didn't see it. If you heard it, you didn't hear it. And everyone keeps quiet."

Posadas said things were so bad that Nunez almost never went outside the house. He told his mom that he was afraid and that he wanted to get back to California to meet his new daughter.

After just a few days in San Pedro Sula and after a possible threat from gang members, Nunez left earlier than he planned.

In the past, Nunez had crossed into the U.S. at the border in California. But this time, he had an injured foot. He planned to cross at the border in Texas. The route is shorter but also more dangerous.

He let Lozano know about his plan. He called her on the phone almost every day using the phone of the smuggler taking the migrant group across the border.

About a week after leaving home, Nunez spoke with his mother for the last time. He asked her to pray that everything would turn out well. A day later, he called Lozano. He seemed calm and happy.

The group made it to Piedras Negras, across from the Texas town of Eagle Pass. Lozano was told to wait for a phone call, then she could pay the smuggler half the money -- about $3,000. Then she needed to wait for another call from Nunez's sister to confirm his safe arrival before paying the remaining $3,000.

The calls never came. Lozano never heard from Nunez. The smuggler told her they were still waiting to cross. Then the phone went unanswered.

Another week went by. Then, Posadas saw on television news that authorities had found the bodies of 72 migrants on a large farm in San Fernando, Mexico, across the border from Texas.

Posadas says she started to cry "like a crazy person. There were no names, but I was shaken."

An investigation found that drug gang members had stopped two large trucks filled with migrants in northern Mexico. The migrants were taken to the farm and asked to join the gang.

Only one of the migrants agreed. The rest were blindfolded, tied up and shot dead. Among the identified victims were two neighbors who had left with Nunez. But there was no sign of Nunez.

Nunez's father offered his genetic material, or DNA, to be compared with the unidentified bodies. But still, Nunez was not found.

Posadas and Lozano began looking for Nunez in prisons, holding centers and hospitals. They contacted Mexican, Honduran and Ecuadorian authorities many times. Yet, they still found nothing.

After years of searching, Posadas thought that she would never find an answer to what happened to her son.

Posadas had no way to know, but she could have had her answer just days after the mass killing. 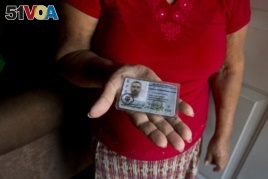 In this Nov. 3, 2018 photo, Haydee Posadas shows the driver's license her son Wilmer Gerardo Nunez was carrying when he was blindfolded and shot dead on his journey north, at her home in Ciudad Planeta neighborhood of San Pedro Sula, Honduras.

The official report on the mass killing on the San Fernando farm stated that body number 63 was a male with body art, including a tattoo of Nunez's son's name. The report also noted the body was found with a Honduran driver's license, with the name Wilmer Gerardo Nunez Posadas on it.

But that information was not released. Body number 63 was buried in a common grave.

In September 2013, an international team of experts began to identify more than 200 bodies from three mass killings, including the one in San Fernando.

Late last year, a team from Argentina, with the help of the Catholic Church, was able to reach Posadas to tell her about body number 63. They also collected DNA to confirm the identity of Nunez. Posadas learned in May that the DNA test confirmed his identity.

No one has been charged with the killings at San Fernando. Nine bodies are still unidentified. Mexican officials did not comment.

On October 31, the body of Wilmer Gerardo Nunez came home to Honduras. When the box containing his body was opened at a local morgue, the smell of death filled the room.

Posadas said, "My heart hurt so much ... most of all because of the death he suffered, not even knowing who killed him, with his eyes blindfolded, hands tied ..."

Hai Do adapted this story for Learning English based on Associated Press report. Ashley Thompson was the editor.

route - n. a way that someone regularly travels along

smuggler - n. a person who move someone or something from one country into another illegally and secretly

authorities - n. people who have power to make decisions and enforce rules of laws

blindfolded - adj. having the eyes covered by a piece of cloth

morgue - n. a place where the bodies of dead people are kept