Eyes in the Sky Map Amazon on the Ground

Update Required To play the media you will need to either update your browser to a recent version or update your Flash plugin.
By Anne Ball
19 February, 2017


Looking at a rainforest from high in the sky, you might think all the trees look about the same.

But they are not.

Take, for example, the Amazon rainforest in South America. Research shows that the Amazon's biological diversity—the huge number of plants and animals living there—is more of a mix than experts believed. It turns out the rainforest has many species of trees and even different kinds of forests.

The Amazon covers an area of about 7 million square kilometers. It lies within the borders of nine countries: Brazil, Peru, Colombia, Venezuela, Ecuador, Bolivia, Guyana, Suriname and French Guiana, which belongs to France.

About 60 percent of the rainforest falls within Brazil.

For about 150 years, researchers have explored the Amazon. They searched under its tall trees to study the many plants growing there.

Greg Asner has done that too. He is the principal investigator for the Carnegie Airborne Observatory (CAO) program.

Asner studied the plants and then, with his team, developed a tool to identify what is growing in the Amazon rainforest. They use an airplane equipped with a high-technology laboratory to create maps of the area.

When the plane flew over Peru, the team learned there are many more -- and different kinds of -- forests than was documented before.

Researchers once thought the western Amazon had three to five different forests. Then, Asner notes, his team mapped the area in the CAO aircraft. 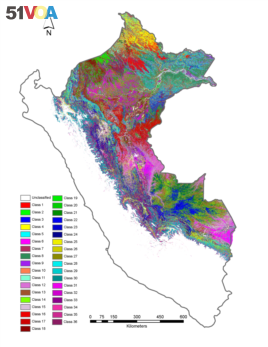 "We flew over and we mapped 36 distinct forest types. And so what we did, we just increased the diversity of the region by tenfold and that's important because the region, the Peruvian Andes and Amazon, just like all the other countries that occupy that region, are rapidly developing."

The CAO is equipped with airborne laser-guided imaging spectroscopy. This technology enables Asner and his team to take three-dimensional images of the forest far below. These pictures give the appearance of length, width and depth. They have bright colors and look like modern art paintings. Yet they show different tree species. 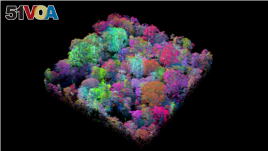 Asner says the team is gathering more than just pictures of plants.

"And at the same time we're able to assess the health, composition and types of trees that are there, from their chemical signatures."

He says getting chemical information on the trees is like a doctor taking blood from a patient. The images tell the researchers about the health of the forests, and give them genetic information, too.

But how can you get chemical information from trees while flying above them?

Asner says the CAO aircraft uses sunlight as the main measurement tool. The sunlight reflects off the tops of the trees. With the equipment on the plane, they can measure infrared light – the light that cannot be seen.

"This is in the shortwave infrared. So we can't see this with the naked eye. But we are able to read the molecular composition of the tree canopy."

This information helps them understand how the plant species and forests change in different areas.

Asner says they can use airborne laser-guided imaging spectroscopy over a huge area that has never been mapped. In this case, it is 76 million hectares in the Amazon.

The Carnegie team joined with the Peruvian Ministry of Environment to study that country's forests. Asner says this technology is still new to science, and it can help officials watch over and protect the forests.

"The application to Peru is really a big step forward because it tells us that we can use this still-new approach to map the composition of forests, in this case,and use that information to do better forest management, conservation and planning for future changes that we know the region is undergoing."

He says their maps help researchers and government officials make decisions based on the actual biodiversity of each area. No longer are people treating the Amazon rainforest "like a big green carpet" – one that is the same everywhere. 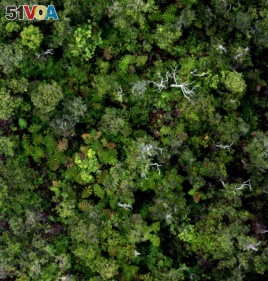 The view of the Amazon forest looking down from the tree top. (Greg Asner)

Researchers will be busy because they noticed plant species that are little known, or completely unknown, in the forest communities.

The Carnegie team is now working with Equador to map its countryside. The images will help Ecuadorean officials preserve their forests.

The next step is to take the technology even higher—to orbit the Earth. Then researchers may observe the biodiversity not just of the Amazon, but the whole planet.

The orbiting satellite would remap the entire Earth every 30 days and measure the health of its biodiversity.

Biodiversity is important to the health of the planet, Asner explains. It is the "fabric" that is under all the planet's systems, like water and food.

"So where the different species are and what types of species we have actually affects all the major processes that regulate our climate."

So, Asner adds, finding ways to watch the Earth will help researchers make better decisions on how to save more species and help stop destruction of our planet.

Anne Ball wrote this story for Learning English with information from Kevin Enochs from VOA. George Grow was the editor.

tenfold – adj. ten times as much or many

laser – n. a device that produces a narrow and powerful beam of light that has many special uses in medicine, industry, etc.

reflect – v. of light, sound, etc. to move in one direction, hit a surface, and then quickly move in a different and usually opposite direction

shortwave – n. a radio wave with a wavelength between 10 and 100 meters

canopy – n. the highest layer of branches in a forest or on a tree