Update Required To play the media you will need to either update your browser to a recent version or update your Flash plugin.
By VOA
11 August, 2016

Fu Yuanhui is an Olympic swimmer. She is 20 years old and from the Chinese city of Hangzhou. She competed in the 100-meter backstroke event this week in Rio de Janeiro. She finished third in her semi-final swim on August 7.

It was not her swimming, however, that made her famous. It was some of the comments she made afterward. 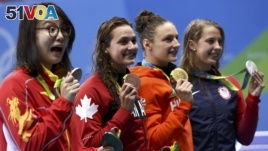 A Chinese reporter spoke with Fu after the semi-finals. The reporter told her that she swam the race in under 59 seconds. This seemed to shock Fu.

"58.95?" Fu said with excitement. "I was really fast!" She told the reporter that she used "mystical powers" in her swim.

Her shock, joy and honesty won her many friends in China -- and around the world. People began making GIFs of her excited facial expressions. Those images spread quickly.

One American swimming coach wrote on Twitter: "Our swimmers are great, but Fu Yuanhui from China is easily my favorite."

Another American wrote, "Fu Yuanhui from China is the most adorable person on the planet."

Fu's fame only grew on August 9, when she competed in the 100-meter backstroke finals. She beat her semi-final time. She swam the race in 58.76 seconds. It was fast enough to earn her a share of the bronze medal. She tied for third place with Kylie Masse of Canada.

Her comments after the race won Fu even more followers in China and around the world.

At first, the swimmer said she does not think she won a medal. She said she is still pleased with her time because she beat the Asian record.

A reporter told her that she was just .01 seconds behind the silver medal winner. Fu said she couldn't reach second place because her "arms are too short."

Fu started to say even though she "did not win a medal..." when the reporter corrected her.

"But you got a medal. You are third," the reporter said.

Fu looked around in shock. "I didn't know!"

She then said, "Well, then I think that's not bad at all!"

Her reaction and personality have made Fu Yuanhui one of China's -- and the world's -- favorite Olympians.

The New York Times newspaper wrote Thursday of the swimmer, "Rather than mere happiness at her performances, Ms. Fu, 20, exhibits something closer to pure joy, bouncing around and making animated faces."

Ashley Thompson wrote this story with materials from Huffington Post and the New York Times. George Grow was the editor.

mystical - adj. having a spiritual meaning that is difficult to see or understand

exhibit - v. to show or reveal (something)

bounce - v. to move with a lot of energy and excitement