Update Required To play the media you will need to either update your browser to a recent version or update your Flash plugin.
By Bryan Lynn
15 April, 2019


The operator of Japan's Fukushima nuclear center has begun removing fuel from a reactor that melted down in a 2011 accident.

The Tokyo Electric Company, also known as TEPCO, said Monday it had successfully removed the first of more than 560 mostly used fuel units inside a pool in the reactor's Unit 3.

The operation marked the first time TEPCO has removed fuel from the highly polluted building containing the Unit 3 reactor. Workers are controlling removal equipment from a room away from the building because of high levels of radiation. 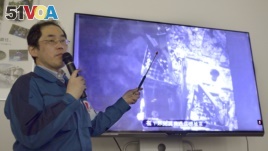 A Tokyo Electric Power Co. worker explains the operation in the No.3 reactor building at Fukushima Daiichi nuclear power plant in Okuma town, Fukushima prefecture, Japan, in this photo taken by Kyodo April 15, 2019. (Kyodo via Reuters)

Unit 3 was one of three reactors at the Fukushima plant to suffer meltdowns after a 2011 earthquake and tsunami shut down the plant's cooling systems. It was the world's worst nuclear disaster since Chernobyl in 1986. The accident forced 160,000 people to flee poisoned areas near the plant and many never returned.

The fuel units were not broken in the accident. But the pools that hold them sit about 18 meters above ground and are not fully contained. The units are being moved to safer ground to avoid a possible new disaster in case another major earthquake hits.

Fukushima's reactors four through six were not operating at the time so they did not melt down. However, Unit 4 was damaged by an explosion in the days after the tsunami. TEPCO finished removing all the nuclear fuel kept inside Unit 4's storage pool in December 2014.

Officials have said the current operations at Unit 3 are expected to be completed by March 2021. After that, TEPCO plans to continue with the removal of about 1000 nuclear fuel units from the storage pools of reactors one and two.

After those removals are completed, TEPCO will begin a much bigger effort – clearing melted fuel from inside the reactors. Many of the details of those operations remain largely unknown.

In 2016, the Japanese government estimated that total costs from the Fukushima disaster would reach $192 billion. The amount includes efforts to completely take apart the plant, clean affected areas and pay money to disaster victims.

Bryan Lynn wrote this story for VOA Learning English, based on reports from the Associated Press, Reuters, Agence France-Press and VOA News. Caty Weaver was the editor.

unit – n. a single, complete thing that may be part of a larger thing

pool – n. a small area of water or container for water