Update Required To play the media you will need to either update your browser to a recent version or update your Flash plugin.
By Dan Friedell
31 May 2022


Two children were buried on Monday in Uvalde, Texas on what would have been the start of their summer vacation.

They were the first burials among 19 students and two teachers killed in a shooting at Robb Elementary School last week.

People gathered to mourn 10-year-old Amerie Jo Garza at Hillcrest Memorial Funeral Home. The funeral home is across the street from the school where she was killed. Others went to remember Maite Rodriguez, also 10, at the town's other funeral home. 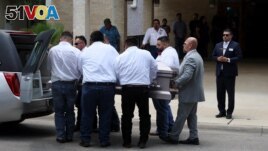 Pallbearers carry the coffin of Amerie Jo Garza during the funeral service for one of the victims of the Robb Elementary school mass shooting that resulted in the deaths of 19 children and two teachers, in Uvalde, Texas, U.S., May 31, 2022. (REUTERS/Shannon Stapleton)

The rest will be buried over the next two weeks while lawmakers and leaders are debating what to do about gun violence.

Among the mourners at Amerie's funeral were Maite's family members. Like many people in the small town near the Mexican border, they were attending both.

Some mourners at Amerie's wore purple clothing or carried a lilac flower, because her father Angel, said it was her favorite color. Amerie had just turned 10 and received a mobile telephone for her birthday. Friends said she tried to use the phone to call for help during the attack.

Maite's family wore green shirts with an image showing Maite with angel wings. They stopped at the area where the gunman crashed his car before entering the school.

The U.S. Department of Justice announced on Sunday that it would look to study how law enforcement responded to the school shooting in Uvalde.

The gunman, Salvador Ramos, entered the elementary school through an unlocked door around 11:40 on Tuesday morning and started shooting.

Police officers followed him into the school within minutes. However, they waited for over an hour before entering a locked classroom and killing Ramos.

Officials said Friday that students were calling the emergency phone number, 9-1-1, to ask for help throughout the attack. But the leading police officer at the school did not think the children were still being shot at the time. They said the police believed Ramos was hiding in a different classroom.

The information raised new questions about whether lives were lost because officers did not act faster to stop the gunman. Officers from the U.S. Border Patrol finally went into the classroom and killed Ramos.

Officials said Ramos had legally purchased two guns shortly before the school attack. He had just turned 18, permitting him to buy the weapons under federal law.

During President Joe Biden's visit to Uvalde on Sunday, people shouted, "Do something," repeatedly. And Biden promised, "We will."

On Monday, the American president said there may be support from both Republican and Democrat lawmakers to make it harder to buy powerful guns like the AR kind of gun that Ramos purchased.

The Second Amendment of the U.S. Constitution says: "A well regulated Militia, being necessary to the security of a free State, the right of the people to keep and bear Arms, shall not be infringed."

In 2008, the Supreme Court made its first ruling in 70 years related to the Second Amendment. The Court said an individual has the right to have a handgun in his or her home for self-defense.

Previously, the Court had said people may only have guns in connection to service in a state militia.

respond – v. to do something as a reaction to something that has already happened

infringe– v. to limit or restrict something

regulate –v. to bring something under control of authority