Future of News: Will Robot Readers Take Over?

Update Required To play the media you will need to either update your browser to a recent version or update your Flash plugin.
By Bryan Lynn
21 November, 2018


Technology is forever changing the way we get our news. Many people now get a lot of their news on electronic devices, instead of traditional media, such as newspapers, television or radio. An increasing number of people also report turning to social media for information.

Now, there is a new technology that could greatly change the way we get the news: computer-created news readers.

The news readers - created by machine learning technology - are based on two real-life Chinese newsmen. One is able to present newscasts in English; the other, in Mandarin Chinese.

In Xinhua's report about the launch, it said machine learning was used to examine video images and sounds of the two newsmen. The system then created the AI robotic presenters, which look and sound like real people.

Similar technology has been used to create video products known as "deepfake videos." A deepfake is a video that looks real, but was electronically changed. Such videos can make people appear to say things they never said or do things that never actually happened.

Xinhua said the AI presenters will be a great improvement to the news team because they "can work 24 hours a day" on its website and on social media. One of the presenters even promised to "work tirelessly" to keep people informed.

Xinhua claimed the AI newsmen were able to read the news "as naturally as" a human presenter.

Some machine learning experts said the system showed off China's latest progress in voice recognition, text-to-speech technology and data analysis. But several experts suggested that the term AI does not correctly describe abilities of the robotic news readers.

On social media, many Chinese noted that the AI presenters did not seem real. People criticized them for not being more lifelike. On China's Twitter-like service Weibo, several users wrote that the news readers have "no soul." One user joked: "What if we had an AI leader (of China)?"

Others wondered about the effects robots might have on employment and workers. "It all comes down to production costs, which will determine if [we] lose jobs," one Weibo user wrote. 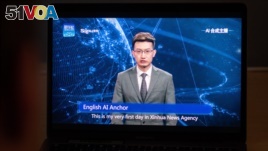 This photo illustration shows a man watching an artificial intelligence (AI) news anchor from a state-controlled news broadcaster, on his computer in Beijing, Nov. 9, 2018.

Some people argued that only low-level jobs requiring heavy labor will be easily replaced by robots. Others praised the technology as a way for companies to make money from low-cost labor machines.

MIT Technology Review said the presenter itself is little more than "a digital puppet that reads." It added, "The ‘AI' in this case is the software that learns what makes a convincing-looking face and voice." While the demonstration was clearly evidence of improved technology, it was "a very narrow example of machine learning," the report said.

Some businesses have experimented with similar technology for possible use in news operations.

Britain's BBC recently released a video that used machine learning to make it look like one of its news readers was speaking different languages. The London-based company that developed the system says its goal is to "remove the language barrier" for many different kinds of video across the internet.

Trevor Wood works on text-to-speech technology for the Alexa system. He said in an internet post that a machine learning system was able to help Alexa ‘learn' to speak in a news-like voice after only a few hours of examining data.

Such a system could be further developed to provide other kinds of speaking voices for different situations, Wood said. Amazon is reportedly preparing to launch Alexa's news reader voice in the near future.

Bryan Lynn wrote this story for VOA Learning English. His report was based on reports from the Reuters news agency, VOA News and online sources. George Grow was the editor.

data analysis – n. process of using computers to gather and inspect facts and other information

soul – n. the part of a person that is not their body, which some believe continues to exist after death

determine – v. discover the facts or truth about something

puppet – n. a person controlled by someone else

convincing – adj. able to make you believe that something is true