Update Required To play the media you will need to either update your browser to a recent version or update your Flash plugin.
By Dan Friedell
29 September, 2016

Gary Johnson is the Libertarian Party candidate for president. His name will appear on ballots in every U.S. state and territory on Nov. 8. It will be next to prominent candidates from the two main political parties, Democrat Hillary Clinton and Republican Donald Trump.

Johnson is the former governor of the southwestern state of New Mexico.

And his name has been on the ballot before. He was the Libertarian candidate in 2012. He received about 1 million votes, but Barack Obama and Mitt Romney received many millions more.

Johnson does not have enough support in public opinion studies to be included in the televised presidential debates like the one between Clinton and Trump on Monday night. 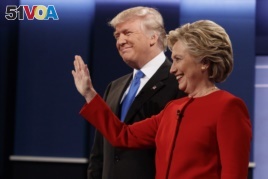 But a television news program did give Johnson a chance to speak about himself and some political issues on Wednesday.

And it did not go well.

The host of the show asked him to name a foreign leader he admires.

Johnson had trouble coming up with a name. Later, he said he was trying to recall the name of former Mexican president Vicente Fox. Johnson worked with Fox when he was governor of New Mexico.

Johnson said he was having "an Aleppo moment" when he could not think of Fox's name.

The phrase refers to the time in early September when Johnson was asked about Aleppo, the city at the heart of the Syrian civil war.

And he replied by asking "and what is Aleppo?"

People criticized Johnson for not knowing enough about the war in Syria to identify one of the country's major cities.

On Thursday, people reacted to Johnson's trouble with the names of foreign leaders. They also wanted to remind the candidate that problems in Syria should not be minimized.

Many people posted news of bombings or deaths in Aleppo while mentioning Johnson and saying "This is an Aleppo moment."

What do you think of Johnson's "Aleppo moment?" We want to hear from you. Write to us in the Comments Section or on 51VOA.COM.

admire – v. to feel respect or approval for (someone or something)

minimize – v. to treat or describe (something) as smaller or less important than it is

trending – adj. a comment or story popular, or often repeated on social media