Update Required To play the media you will need to either update your browser to a recent version or update your Flash plugin.
By Christopher Cruise
26 August, 2014


The Palestinian militant group Hamas has received much attention for its use of tunnels in its war with Israel. But the Hamas-controlled Gaza Strip is not the only place where tunnels are used in a conflict.

Some South Korean and American security experts say North Korea has dug as many as 20 tunnels under the Demilitarized Zone, or DMZ. The South Korean officials say they received information about the underground passageways from people who have escaped North Korea. The officials say some of these defectors claim to have helped build the tunnels.

South Korean forces and their American allies have found only four tunnels between North and South Korea. They discovered three tunnels in the 1970s and one in 1990. But the South Korean Defense Ministry says it continues to investigate the possibility that there are more. 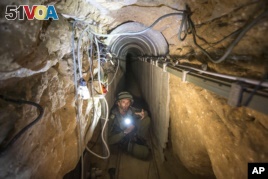 Both Hamas and North Korea have built tunnels for the same reason: to give their fighters a way to surprise their enemy.

Hamas says the tunnels are an important weapon in its fight against Israel. Gaza shares a 59-kilometer-long border with Israel. Israel says Hamas planned to use the tunnels to kill civilians in small Israeli communities near the border.

North and South Korea have a border that is four kilometers wide and 240 kilometers long. North Korea built tunnels to permit the communist state to send thousands of its soldiers to places several kilometers south of the DMZ.

David Maxwell is a retired U.S. Army Special Forces colonel who served in South Korea. He is now an expert at Georgetown University's Center for Security Studies.

He said if North Koreans were dressed in South Korean uniforms, and also attacked U.S. forces near the DMZ, that would have a disastrous effect on the trust between the U.S. troops and their South Korean allies.

Mr. Maxwell said such moves have for many years been part of North Korea's military plans.

Tunnels to Protect Weapons from Airstrikes

The U.S. and Israeli militaries also believe North Korea and Hamas have built many more tunnels for a different reason: to protect their weapons from air bombings. 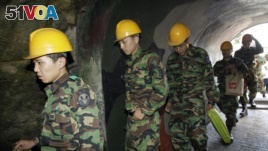 David Maxwell says reports from North Korean defectors and pictures from satellites show North Korea has built thousands of tunnels into mountains and hillsides. He says North Korea has placed artillery, ammunition and medical supplies in the tunnels.

In July, the Israel Defense Force said Hamas had created what the IDF called an "underground city of terror," with many entry places throughout Gaza. The IDF said Hamas uses the tunnels as places to store weapons, control troops and, in its words, transport "terrorists and weapons."

Did North Korea and Iran Help Hamas with Tunnels?

North Korea has not said whether it helped Hamas build tunnels. But both countries are allied with Iran, which has built underground sites to protect its nuclear program from possible air attacks.

Itamar Yaar was the deputy head of Israel's National Security Council. He retired in 2008. He said the Iranian and North Korean militaries have worked closely with one another in recent years. He says the two countries have sent military officials to Gaza to help Hamas.

Eado Hecht is an Israeli defense expert. He teaches military history at several Israeli universities. He says there are major differences between the North Korean and Hamas tunnels. The offensive tunnels in Gaza, he said, are narrow. The North Korean tunnels are big enough for three to five people to walk through.

Mr. Hecht said Hamas usually waits until it will use an attack tunnel before it digs a place to release its troops into Israeli territory. But the four Korean tunnels already had openings on the South Korean side of the border.

Mr. Hecht says Palestinians started building tunnels in Gaza long before they got help from others.

He says Gaza groups began digging smuggling tunnels into Egypt's Sinai Peninsula almost 20 years ago. He says they learned through trial and error and made huge profits from smuggled goods.

Mr. Hecht says Gaza smugglers built about 1,800 tunnels. He says Egyptian security forces destroyed more than 1,600 mostly in the past year. Other smuggling tunnels have collapsed or have been damaged by Israeli air strikes.

This story was reported by VOA reporter Michael Lipin. Michael covers international news for VOA on the web, radio and TV, specializing in the Middle East and East Asia Pacific. Follow him on Twitter @Michael_Lipin. This story was adapted for Learning English by Christopher Cruise.

surprise – v. to cause a feeling of wonder because something is not expected;

disastrous – adj. causing widespread destruction or loss of life, such as an earthquake or plane crash

smuggle – v. to import or export secretly or illegally without paying duties or taxes required by law

destroy – v. to break into pieces; to end the existence of