Update Required To play the media you will need to either update your browser to a recent version or update your Flash plugin.
By Jonathan Evans
29 November, 2018


The only grand piano in the Palestinian territory of Gaza was played in public this week for the first time in 10 years.

Palestinian and Japanese musicians played the piano for 300 people at a November 25 performance at the Palestine Red Crescent Society. For many, it was the first time they had ever heard a piano performed live.

One Japanese pianist, Kaoru Imahigashi, said, "Playing this piano is feeling like playing history. It's amazing. I felt the prayer of peace for many people."

The Japanese government donated the piano about 20 years ago, following temporary peace agreements between Israel and the Palestinians. 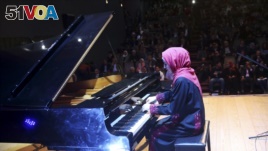 The piano was placed in a large theater at the al-Nawras resort in northern Gaza. A culture ministry official explained that music events were a regular activity there before conflicts between Palestinians and Israelis began again in 2000.

In 2007, the Islamic militant group Hamas took control of Gaza by force after winning legislative elections. Under Hamas rule, many forms of public entertainment were closed, including movie theaters and performance spaces. As a result, the al-Nawras resort closed its theater and swimming pool.

The resort closed permanently in January 2009. The piano sat unused until 2014. An Israeli airstrike that year destroyed the al-Nawras theater. The piano was found undamaged, but unplayable.

The Belgian nonprofit group Music Fund supports music education in the Palestinian areas. In 2015, the group sent a French expert to Gaza to repair the piano. Another expert traveled there in October to make final repairs on the instrument.

One the night of the performance, all 300 seats of the theater at the Palestine Red Crescent Society were filled. Fans of all ages listened intensely and applauded at the end of each performance.

It was the first time that 22-year-old Yasmin Elian had attended a piano concert. She said after the concert, "This encourages me to learn piano."

Fares Akram reported this story for the Associated Press news agency. Jonathan Evans adapted it for Learning English. Ashley Thompson was the editor.

applaud(ed) – v. to strike the hands together over and over to show approval or praise