Update Required To play the media you will need to either update your browser to a recent version or update your Flash plugin.
By Ashley Thompson
17 September 2020

Gender reveal parties are growing in popularity in the United States. The purpose is for parents-to-be to announce to family and friends the sex of their unborn child. 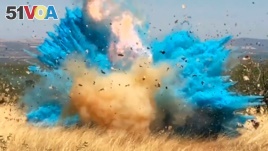 FILE - This April 23, 2017, photo from video provided by the U.S. Forest Service shows a gender reveal event in the Santa Rita Mountain's foothills, southeast of Tucson, Ariz. The explosion from the reveal ignited the 47,000-acre Sawmill Fire.

The "reveal" is often done through colors: pink for a girl, and blue for a boy. People attending such a party might eat a cake filled with blue or pink frosting. Or the mother-to-be and her partner might open a big box full of either blue or pink balloons.

Today, Americans are coming up with increasingly complex ways to announce the sex of their unborn child. The party that caused the El Dorado wildfire, for example, involved a smoking pyrotechnic device.

For some people, gender reveal parties are fast becoming an important tradition. But critics say that more than a few parties have gotten too extreme.

Media reports often describe Jenna Karvunidis as the "inventor" of the reveal party. In 2008, she published images on social media of a cake she made with pink frosting in the middle. She used the pictures to announce to a few family members and friends that she was pregnant with a girl. The post went viral, and so did her idea.

Her reveal was simple compared to what some pregnant women and their partners do today. Karvunidis says that social media attention and possible earnings from viral posts have pushed couples to extremes. Pink or blue frosting, it seems, is no longer enough.

In 2018, one couple removed the inside of a watermelon, filled it with a sweet blue treat and then had an alligator bite it to reveal the sex of their baby.

Another couple paid for a small airplane to drop small colored balls on party guests.

Some people are even jumping out of planes. In one case, a man parachuted from a plane toward event guests with a smoke canister that released colored smoke.

Some of these events have produced painful viral videos. One such video shows a Massachusetts man accidentally firing an explosive canister of blue smoke right between his legs.

Sometimes, the parties cause a lot of damage. One recent party near Los Angeles led to the El Dorado fire, which has burned around 5,600 hectares to date.

A 2018 wildfire in Arizona is also blamed on a gender reveal event gone wrong.

It is unclear if the fires will make Americans rethink how they want to reveal their baby's sex.

There are signs that the interest in gender reveal parties is spreading worldwide. One couple recently lit up the tallest building in the world, the Burj Khalifa in Dubai, in blue to announce they were expecting a boy.

Karvunidis, however, says she has had enough.

She wrote on Facebook last week, "Stop it. Stop having these stupid parties."

cake - n. sweet baked food made from a mixture of flour, sugar, and other ingredients (such as eggs and butter)

frosting - n. a sweet, creamy mixture that is used to cover cakes

viral - adj. spreading very quickly to many people especially through the Internet

alligator - n. a large reptile that has a long body, thick skin, and sharp teeth, that lives in the tropical parts of the U.S. and China, and that is related to crocodiles

canister - n. a metal case that contains gas or chemical substances and that bursts when it is fired from a gun

Are gender reveal parties common where you live? What do you think about this tradition? Let us know in the comments section.