Update Required To play the media you will need to either update your browser to a recent version or update your Flash plugin.
By Anne Ball
03 June, 2019


Six months ago, a Chinese scientist was widely criticized for helping make the first gene-edited babies.

Now, new information suggests other people may be interested in doing the same kind of work.

William Hurlbut is a bioethicist at Stanford University in the United States. He told The Associated Press (AP) that a fertility center in Dubai, in the United Arab Emirates, wrote to scientist He Jiankui by email. Hurlburt said the center wanted training in gene editing and asked He for information on the process.

The Chinese scientist reportedly had often asked the Stanford doctor for advice.

Hurlburt told the AP that He told him he had heard from scientists from more than one country, and families with inherited health problems. He said that they had messaged support and interest in changing the genes of human embryos. Hurlbut gave the AP an email he said the Dubai clinic sent to He in December.

It shows "what eagerness there is out there for this technology," Hurlbut said, and the need "for some sort of enforceable governance" of it.

Other researchers have also heard of people wanting to edit embryos. Jennifer Doudna is with the University of California, Berkeley. She is the co-inventor of the CRISPR gene-editing tool that He used in his research.

Doudna said the reports that others want to edit embryos are "entirely credible." She said scientists need to work on establishing policies for how and when such work should happen.

She added that the technology is "not ready for clinical use in human embryos." But, she said, research should continue.

Last November, He reported that he had changed the genes of twin girls when they were embryos. He claimed he did this before the girls were born to help them resist possible infection with the AIDS virus. 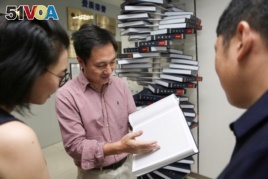 Scientist He Jiankui shows "The Human Genome," a book he edited, at his company Direct Genomics in Shenzhen, Guangdong province, China August 4, 2016.

Ever since then, scientists and policy leaders have been debating the need for international standards, or controls. Editing embryos' genes is illegal in many countries because it risks damaging other genes. The changes in the genes also can be passed to future generations. It is unknown how editing one generation will affect the next. Many scientists condemned He's work.

Some have also criticized researchers who were thought to have known about, or strongly suspected, what He was doing.

Hurlbut and two other employees at Stanford University were cleared of any wrongdoing. Rice University in Texas is still looking into whether He's former advisor, Professor Michael Deem, may have been involved.

Hurlbut, said some people have expressed support for He and his research.

"If you call (He) a rogue scientist who did this all by himself, you miss the truth," Hurlbut said, adding, "then you fail to see what's wrong" with the way science is governed around the world.

The Chinese scientist has not been seen publicly since shortly after he spoke at a conference in Hong Kong in November. The AP's efforts to reach him by telephone and email were unsuccessful.

He's claim has yet to appear in a scientific publication, but the babies' existence seems to have been confirmed by investigators in Guangdong province. According to China's official Xinhua news agency, investigators said He avoided supervision of his work and violated research norms out of a desire for publicity.

There has been no information on how the two girls are doing. Information is also lacking on the second pregnancy He achieved with a gene-edited embryo. This one is thought to be about seven months along now.

International committees have been formed to look into how to deal with the issue.

What do you think of about gene-editing embryos? Is it a good idea, or not? Write to us in the comments section below.

gene-edited – adj. genes, containing DNA, that have been changed before being put back in a body

bioethicist – n. a person who studies the ethics and implications of certain biological and medical procedures, technologies and treatments

inherited – adj. to have (a characteristic, disease, etc.) because of the genes that you get from your parents when you are born

credible – adj. able to be believed : reasonable to trust or believe

rogue – adj. used to describe something or someone that is different from others in usually a dangerous or harmful way

clinic - n. a place where people get medical help

twin – n. either one of two babies that are born at the same time to the same mother

according to – prep as stated, reported, or recorded by (someone or something)