Update Required To play the media you will need to either update your browser to a recent version or update your Flash plugin.
By Dan Friedell
11 June 2021


Scientists near San Francisco work to identify a type of endangered fish using a tool that was originally made for treating cancer.

CRISPR is a tool that is able to change the genetic material in specific cells. The technology is now used to change the structure of immune cells so they can recognize and fight cancer.

The same technology is used in Sherlock. Sherlock, of course, is named after the famous investigator Sherlock Holmes.

They do not, however, use Sherlock to change fish cells. Instead, the ocean researchers catch the fish, collect a small amount of mucus and then test the cells to find the genetic makeup of the fish.

It can be done in about 30 minutes. In the past, the researchers would have to wait weeks or months to get test results.

The technology is extremely helpful when looking at different species of Chinook salmon, because they look nearly the same. However, some of them are endangered, and the scientists need to keep track of them. 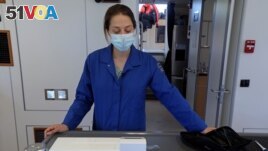 Emily Funk waits for a Sherlock test on a sample from a Chinook salmon while on a research vessel on the San Joaquin River off Antioch, California, U.S., May 25, 2021. REUTERS/Nathan Frandin

Andrea Schreier is an associate professor at the University of California in Davis. She wrote a paper published in the journal Molecular Ecology Resources about a similar project with a different kind of fish known as smelt. Now she is working on the salmon.

In the past, the scientists would catch the Chinook salmon and measure them to tell them apart.

"It's not very accurate," she said.

Schreier said when she and her team catch the fish, the Sherlock machine is able to quickly tell them if they have one of the special salmon. It's important because it allows the scientists to do things that will help the endangered salmon live longer. For example, they can catch them in lakes far away from the coast and take them by truck to the San Francisco Bay.

In the past, the fish might have tried to make it to the Bay by swimming in rivers. However, due to climate change, the river water is sometimes too warm for the fish to make the trip safely.

Schreier said she feels good about the project because she likes being able to assist with conservation.

"I really want to work to, you know, maintain our ecosystems and our native populations as much as possible, given all of the pressures that we humans place on them through our different activities."

Melinda Baerwald is an environmental program manager with the California Department of Water Resources. She also is working on the study.

"The power of genetics is now unlocked for other people to be able to use. And that's one of the big things that I think is changing how we're going to use this in our area for monitoring."

Nathan Frandino wrote this story for Reuters. Dan Friedell adapted it for Learning English. Susan Shand was the editor.

What else would you do with CRISPR technology? Tell us in the Comments Section and visit 51VOA.COM.

mucus –n. a thick liquid produced in some parts of the body

accurate –adj. able to produce results that are correct

monitor –v. to watch, observe, listen to, or check (something) for a special purpose over a period of time