Update Required To play the media you will need to either update your browser to a recent version or update your Flash plugin.
By Jill Robbins
09 November 2021


General Electric, a company known simply as GE to generations of Americans, announced Tuesday it will split into three companies.

GE will become three companies dealing with aviation, healthcare and energy over the next few years.

The company, based in Boston, has been changing in recent years. In the 1990s, it had become a huge international company made up of many businesses that sold many different kinds of products. GE not only sold light bulbs and home electrical devices, but it also provided loans for airplanes and property. 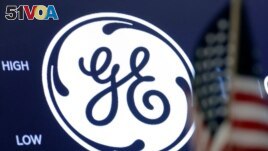 FILE - The General Electric logo appears above a trading post on the floor of the New York Stock Exchange, June 26, 2018.

However, its loan business was heavily damaged by the financial crisis of 2008 and the coronavirus pandemic of 2020. GE no longer makes light bulbs or home devices and stopped the loan business in March of this year.

GE said it will separate its healthcare business in early 2023 and its energy business, including renewable energy, power and digital operations in early 2024.

Lawrence Culp, Jr. is the head of GE. He said in a statement, "By creating three industry-leading, global public companies, each can benefit." He added that it would be better for customers, investors and employees.

Culp will become chairman of the healthcare company. Peter Arduini will serve as chief executive of GE Healthcare as of January 1, 2022. Scott Strazik will become chief of the combined renewable energy, power, and digital business. Culp will lead the aviation business along with John Slattery, who will remain its chief executive officer. GE will keep an interest in part of the healthcare business.

Aviation is the most profitable part of GE's business. The company produces jet engines, flight systems, replacement parts and maintenance services for aircraft.

Most valuable company in the world

The company has spent years becoming smaller since it had expanded in the 1980s and 1990s. During the late-1990s growth period, GE's rising stock price made it the most valuable company in the world.

However, the financial crises of 2007-2008 showed that the lending business of GE was at risk of failing.

In 2015, GE announced a big change for the company. It promised to sell off many parts of its business to give more attention to power, aviation, renewable energy and healthcare. That led to some changes in leadership.

The company said Tuesday that it expects the split to cost about $2 billion. The board of directors must approve those costs.

The roots of General Electric go back to the famous American inventor Thomas Edison who started the company in 1892.

Michelle Chapman reported on this story for the Associated Press. Jill Robbins adapted it for Learning English. Mario Ritter, Jr. was the editor.

aviation – n. the business or practice of flying airplanes, helicopters, and the like

light bulb – n. a glass bulb or tube that produces light when it is supplied with electricity