Update Required To play the media you will need to either update your browser to a recent version or update your Flash plugin.
By Anne Ball
19 May, 2016


American scientists announced this week that genetically engineered food is generally safe for humans and the environment.

The National Academies of Science, Engineering and Medicine found that changing the genetics of what we eat does not carry the health risks that opponents claim.

The Associated Press noted that the growth of genetically engineered crops has yet to lead to a jump in food production, as supporters claimed. The report did not find any conclusive evidence of environmental problems from such crops.

Genetic engineering is the technology of changing the genes of living things. The changed gene directs the plant or other organism to do things it normally does not do.

The process of changing the genetic structure of food crops has been debated for some time. Such foods are commonly called GMOs — for genetically modified organisms, or GEs – meaning genetically edited.

The science advisory board released its 408-page report on Tuesday. The group's members said that they recognize it is difficult to measure the indirect or long-term effects in health or the environment. They said it is important not to make wide, far-reaching statements about genetically engineered foods.

The report said the scientists "found no substantiated evidence of a difference in risks to human health between currently commercialized genetically engineered crops and conventionally bred crops, nor did it find conclusive cause-and-effect evidence of environmental problems from the GE crops."

The group, however, did note that scientists do not agree about whether the chemical glyphosate causes cancer. Glyphosate is a herbicide that is often used with genetically engineered crops.

The scientists called for more investigation into the end-product of foods made from GE crops. They said officials should spend less time worrying about how such crops are created.

The report said there is no evidence of environmental problems from genetically engineered crops, but pesticide resistance is a problem. Farmers use chemical pesticides to keep insects and other animals from killing their crops.

Most of the modified plants being grown are soybean, cotton, corn and canola. When farms began growing GE crops instead of traditional ones, there was no substantial change in the amount produced, the report said. 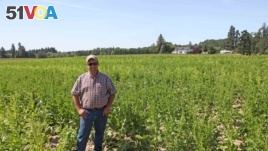 Production of crops, in general, is increasing. The report said U.S. Department of Agriculture data fails to show that GMO crops are increasing at a higher rate.

"Farmers in general are gaining" with less pesticide use and higher productivity, academy committee chairman Fred Gould, according to the Associated Press. Gould works at North Carolina State University.

The National Academy was established more than 150 years ago by then-President Abraham Lincoln to provide scientific advice. The group said earlier it could find no safety problems with eating genetically engineered food.

Gould said this latest report is different because his team started by listening to critics of GE foods, and looked at more than 1,000 studies.

Many scientists who have explored the issue, but were not part of the study team, praised the report. Mark Sorrells at Cornell University called the report, "very well-balanced, accurate." He said it repeats "much of what has already been published many times."

There are other researchers who still oppose genetically engineered foods. Charles Benbrook formerly worked at Washington State University, but now is a private consultant. He said he feels the risks of such foods are more serious than some scientists do, and that the human health studies are not enough.

Some groups opposed to genetically engineering foods criticized the report before it came out. Food & Water Watch criticized the National Academy for taking money from biotechnology companies and using "pro-GMO scientists" to write its reports.

The Associated Press said none of the groups financing the study have direct connections to the agricultural biotechnology industry. The academy said outside experts read the findings, and committee members were cleared of financial conflicts of interest.

Marion Nestle, of New York University, read the report before its release, but did not write it. She said "the report reveals how little is known about the effects of GE foods." She added if the people behind the report wanted to end the polarization over these foods, "this won't do the trick."

So it seems the debate over GE foods will continue.

Anne Ball wrote this story for Learning English with information from the Associated Press. George Grow was the editor.

We want to hear from you. Write to us in the Comments section, and post on 51VOA.COM.

conclusive - adj. showing that something is surely true

characteristic - n. a special quality of someone or something

substantiate – v. to prove the truth of something

commercialized - adj. relating to something done to earn money; for business purposes

consultant - n. a person who gives advice or services to a company in exchange for payment