Update Required To play the media you will need to either update your browser to a recent version or update your Flash plugin.
By Caty Weaver
29 March 2021

They told the jurors to remember 9 minutes and 29 seconds. That was the time that Chauvin had his knee on Floyd's neck. In the video, Floyd repeatedly called out for help. He said he could not breathe and that he was going to die. 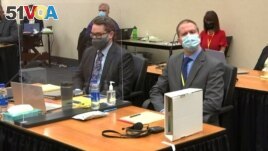 Former Minneapolis police officer Derek Chauvin (R) listens at the opening of his trial for murder of George Floyd in Minneapolis, Minnesota, March 29, 2021, in a still image from video.

The video of the May 25 arrest last year led to months of huge demonstrations in America and elsewhere against police abuse of people of color. Chauvin is charged with several counts of murder. He has pled not guilty to all.

Jerry Blackwell is the government lawyer leading the case against Chauvin. He told the court that the officer used "excessive and unreasonable" force in the arrest. "He was defenseless," Blackwell said of Floyd. "He wasn't resistant."

But defense lawyer Eric Nelson told the court that Chauvin was simply doing his job as a police officer. "Derek Chauvin did exactly what he had been trained to do in his 19-year career" to restrain Floyd after he had resisted arrest.

Nelson said medical evidence will show that there were no signs that Floyd died because he could not breathe. The lawyer said the man died from other health issues, including high blood pressure and drug use.

Before the trial started, Floyd family lawyer Benjamin Crump and other supporters knelt in honor of Floyd outside the courthouse. Crump said, "America, this is the moment to show the rest of the world...there is liberty and justice for all."

The city of Minneapolis agreed recently to pay Floyd's family $27 million in damages to settle their claims of abuse in the case.

The Associated Press and Reuters reported on this story. Caty Weaver adapted the reports for Learning English. Hai Do was the editor.

excessive – adj. too much; too many

plead – v. to say in court that you are either guilty or not guilty of a crime : to make a plea