Update Required To play the media you will need to either update your browser to a recent version or update your Flash plugin.
By Bryan Lynn
07 December, 2016


German Chancellor Angela Merkel has called for a ban on full-face veils worn by some Muslim women.

Merkel announced her position Tuesday at a conference of her Christian Democrat Union (CDU) in the central German city of Essen. Her comments were part of a speech she gave before her reelection as party leader.

"In communication between people, which is of course essential to our living together, we have to show our faces," Merkel said.

She said veils that fully cover the face should be banned "wherever legally possible." Merkel's CDU party has previously discussed banning them in schools, courts and other public buildings.

In the past, Merkel has said she believes Muslims who completely cover their faces have little chance of fully mixing into German society.

Legal experts said it is unclear whether a veil ban would violate Germany's constitution.

Three European nations - France, Belgium and the Netherlands – already have bans on the face-covering veils.

Merkel recently announced she would seek a fourth term as chancellor in elections expected to be held in fall 2017. Her popularity has dropped since Germany decided to accept about one million refugees.

German public opinion studies show Merkel's CDU party is currently leading among voters. But even if the CDU wins, the Chancellor would likely have to form a coalition government with competing parties. 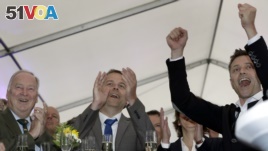 "The 2017 election will be more difficult than any election before, at least since German reunification," Merkel said.

Merkel also faces strong opposition from the anti-immigration Alternative for Deutschland (AFD) party. The AFD has been critical of Muslim migrants entering Germany. The group recently said Islam is not compatible with Germany's constitution.

Bryan Lynn wrote this story for VOA Learning English with reporting from the Associated Press and Reuters. Caty Weaver was the editor.

We want to hear from you. What do you think about governments banning face covers? Write to us in the Comments section, and visit 51VOA.COM.

veil – n. thin piece of material that covers the face

compatible – adj. able to exist or be used together