Update Required To play the media you will need to either update your browser to a recent version or update your Flash plugin.
By Bryan Lynn
10 September 2022

It is currently harvest season for Christian Nachtwey, who operates an apple farm, or orchard, in the western German town of Gelsdorf. A reporter from The Associated Press recently visited Nachtwey as workers loaded up red Elstar apples ready to be shipped to stores.

In addition to apples, Nachtwey's farm also produces a second harvest: electricity. Many of the farm's trees grow beneath solar panels that have been producing power during this year's unusually sunny summer. In addition to providing electricity, the panels protect the fruit below with shade. 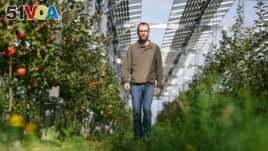 Nachtwey said the idea behind the farm is simple. The design protects the trees from getting too much sun without reducing the available growing area. "On top of that, there's the solar electricity being generated on the same land," Nachtwey said.

Putting solar equipment on the same land as crops is becoming increasingly popular in Europe and North America. Farmers are finding that this model can make the most of their land, while establishing a second way to earn money.

But getting the right mix of crop and solar is difficult. Most fruit requires specific growing conditions. Even small changes in the environment can harm crops and cause financial losses. Even if the fruit survives, it might turn the wrong color or be less sweet and may be difficult to sell.

For this reason, Nachtwey is working with researchers to test which kinds of apples do well under a solar cover. He is also investigating which kinds of solar panels work best in the orchard. For testing purposes, Nachtwey covered some of his trees with a traditional netting material. It is normally used to protect sensitive crops from damaging weather events.

Juergen Zimmer is an expert with the area's agricultural services department. He told the AP that apples grown under the solar covers were a little less sweet this year than those under the nets. But almost no solar-shaded apples got damaged in the intense sunlight that hit the area on July 24. In the non-shaded group, about 18 percent of apples suffered sun damage that day, Zimmer said.

"We need at least two to three full years to record all the weather conditions that might occur," he added. Zimmer and Nachtwey will also need to look at crop production levels and how the solar covers affect fruit color.

Researchers hope the tests will show that fruit crops perform well under solar panels. This could help prevent renewable energy production from competing for valuable agricultural land. That competition has become an increasing concern as the need for renewable energy increases to fight climate change and rising food prices.

Nachtwey said he could use the solar electricity produced on the farm to power his own buildings and machines. But for now, he plans to provide electricity to homes in the surrounding area.

net – n. a material made of crossed threads with holes between them

renewable – adj. any naturally occurring kind of energy, such as sunlight or wind