Update Required To play the media you will need to either update your browser to a recent version or update your Flash plugin.
By Bryan Lynn
05 January 2022


Germany has closed three of its remaining six nuclear power stations. The move brings the country one step closer to its goal of closing all its nuclear power centers by the end of 2022.

Operations at the three stations, or plants, were halted on December 31. All the stations were first powered up in the mid-1980s. 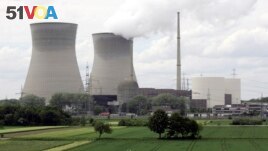 One of them, the Brokdorf plant, sits about 40 kilometers northwest of Hamburg on the Elbe River. In the past, the site was often hit by anti-nuclear protests fueled by the 1986 Chernobyl nuclear disaster in the Soviet Union.

The other plants closed last week were Grohnde, about 40 kilometers south of Hannover, and Gundremmingen, which is 80 kilometers west of Munich. The country's three remaining nuclear power plants are to stop operations by the end of 2022.

The German government decided to speed up its withdrawal from nuclear power after Japan's Fukushima reactor accident in 2011. That accident, caused by an earthquake and huge ocean waves, resulted in the world's worst nuclear disaster since Chernobyl.

Some in Germany have called on the government to reconsider its decision to end nuclear power. Supporters of the technology argue that it can help Germany meet its climate targets for reducing levels of greenhouse gases.

But the government said recently that closing the nuclear plants and ending coal use by 2030 will not affect the country's energy security or its goal of making the economy "climate neutral" by 2045.

Germany's energy industry group BDEW estimated the six nuclear power plants produced about 12 percent of the country's electricity in 2021. The share of renewable energy was nearly 41 percent, while coal was 28 percent. Gas production amounted to about 15 percent.

The mayor of Gundremmingen, Tobias Buehler, was asked about possible job losses at the town's plant. He told Reuters that the center's employees would be busy taking apart the nuclear reactor after the shutdown.

"And this period of dismantling will certainly take another one or two decades," Buehler said. Germany's nuclear power companies will receive nearly $3 billion for the early closures of the plants.

A final decision has not been made about where to store tens of thousands of tons of nuclear waste produced by German power plants. Experts say some material will remain dangerously radioactive for many generations.

renewable – adj. any naturally occurring kind of energy, such as sunlight or wind

dismantle – v. to take something apart so that it is in several pieces

facility – n. a part of a system or machine that makes it possible to do something