Update Required To play the media you will need to either update your browser to a recent version or update your Flash plugin.
By Bryan Lynn
20 December, 2016


German police have released a man they arrested shortly after a deadly truck attack on a Christmas market in Berlin.

Officials said there was not enough evidence to link the suspect to the attack Monday that killed 12 people and injured nearly 50.

The truck crashed into the holiday market and continued for about 60 meters before coming to a stop. Witnesses said they saw a man fleeing from the truck after the attack.

Police said the suspect matched descriptions of the man running away. But they said earlier Tuesday they were not sure if the man arrested was actually the attacker.

Interior Minister Thomas de Maiziere said the suspect was a Pakistani citizen. He entered Germany as a migrant on December 31 last year and arrived in Berlin in February.

The head of Germany's Federal Criminal Police force said the man denied involvement in the attack. Officials said they were working with "limited" evidence. 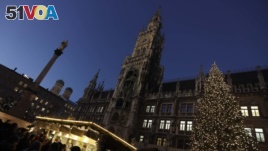 Visitors take a stroll at the Christmas market in front of the town hall at the Marienplatz square in Munich, Germany, Dec. 8, 2016. A strong police presence was felt at the square following the Berlin market attack.

German officials said the investigation is ongoing and have warned the public that the suspect has not been caught. They urged people to watch out for and report suspicious movements or behavior.

German Chancellor Angela Merkel said officials have to assume that Monday's truck attack on the Christmas market was an "act of terrorism."

Merkel and other senior German officials went to the area of the attack Tuesday. They spoke with police officers at the market and left flowers to honor the victims. Later, Merkel and German President Joachim Gauck also attended a memorial service at the church nearby.

On Tuesday, the terror group Islamic State said the person who carried out the attack did so "in response to calls" for violence targeting citizens of what it called "Crusader" nations.

The attack came less than a month after the U.S. State Department warned that extremist groups - including Islamic State and al-Qaida - might carry out holiday attacks in Europe. IS and al-Qaida have both called on followers to use trucks to attack crowds.

Monday's truck attack was similar to one that took place on July 14 in southern France. In that case, a truck crashed into a celebration in the French city of Nice, killing 86 people on France's Bastille Day holiday.

IS claimed responsibility for that attack, which was carried out by a Tunisian national living in France.

Bryan Lynn wrote this story for VOA Learning English, with material from VOA News, the Associated Press and Reuters. Mario Ritter was the editor.

suspicious – adj. causing a feeling that something is wrong

assume – v. to believe something is true without actually knowing it