Germany Out of World Cup, Mexico Advances with Help from S. Korea

Update Required To play the media you will need to either update your browser to a recent version or update your Flash plugin.
By Ashley Thompson
27 June, 2018

Germany is out of the World Cup. The defending champions lost to South Korea 2-0 on Wednesday.

Germany ended up last in Group F. Sweden and Mexico advanced from that group to the round of 16. South Korea did not advance despite its surprising victory over Germany.

It is the first time since 1938 that Germany has not advanced out of the group stage of World Cup play. 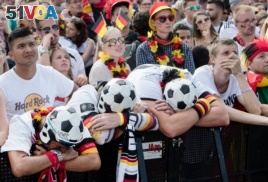 Supporters of the German national football team react as they attend a public viewing event at the Fanmeile in Berlin to watch the Russia 2018 World Cup Group F football match between South Korea and Germany on June 27, 2018.

All four Group F teams had a chance to advance Wednesday. Their chances depended on the results of the other match. The two matches were played at the same time, one in Yekaterinburg, Russia, and the other in Kazan, Russia.

Sweden beat Mexico 3-0, winning the group. That result put Germany in a good position to advance, as well. All the Germans needed to do was to score one goal against the South Koreans.

German defender Mats Hummels said after the match, "It's very very hard to put it into words. We believed until the end today, even when it was 0-1. I think we kept trying to turn it all around."

A different ending for Mexico

After watching their team play poorly against Sweden, the mood among Mexico fans at the game improved when news came in that South Korean goalkeeper Joe Hyeon-woo was preventing Germany from scoring.

Then, Mexicans at the game -- and around the world -- cheered wildly when South Korea scored its first goal.

In a Twitter video taken by VOA reporter Ramon Taylor, Mexican fans at an eating-place in New York City shouted in Spanish "CO-RE-A" after South Korea scored its first goal.

In another Twitter video taken in Mexico City's Zocalo Square, Mexican fans found a South Korean man among the crowd. The fans cheered for him and lifted him above the masses.

Besides Germany this year, France in 2002, Italy in 2010 and Spain in 2014 also got eliminated in the group stage as defending champions.

Ashley Thompson adapted this article based on an Associated Press report and other materials. Hai Do was the editor.

mood - n. the way someone feels : a person's emotional state

eliminated - v. to be defeated and removed from a competition