Update Required To play the media you will need to either update your browser to a recent version or update your Flash plugin.
By Bryan Lynn
13 September 2022


Germany says it will expand state loans to help struggling energy companies. The loans are meant to help companies hurt by increasing gas prices linked to the war in Ukraine.

Russia sharply reduced gas exports to Europe after the West placed economic restrictions on Russia over its invasion of Ukraine. The action has led to increases in energy prices that threaten to put millions of Europeans into cold and poverty.

The assistance will come from a $67-billion fund that Germany established to help companies deal with the economic effects of the COVID-19 pandemic. That information comes from the country's Handelsblatt newspaper. The fund is called the Economic Stabilization Fund (ESF). 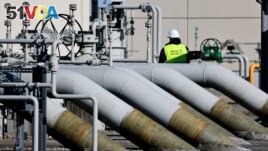 In this file photo, pipes at the landfall facilities of the 'Nord Stream 1' gas pipeline are pictured in Lubmin, Germany, March 8, 2022. (REUTERS/Hannibal Hanschke/File Photo)

The loans will provide guarantees and liquidity assistance to energy companies hit by large reductions in gas imports from Russia, German finance ministry officials said. The ministry added that the assistance plan is right for the current situation because it is unclear how long the country's energy issues will last.

Germany's cabinet is expected to approve the plan on Wednesday. It will then be sent to parliament for approval.

Last week, one of Germany's biggest importers of Russian natural gas, VNG, became the latest energy company to ask the government for financial assistance to stay in business. VNG has been hit by a sharp drop in Russian gas exports to Europe. This has forced the company to raise its energy prices.

In July, another German energy company, Uniper, secured about $19 billion in government assistance to support its business.

Separate proposals from the European Commission (EC) to fight the crisis are set to be announced Wednesday. EU energy ministers will then consider the proposals at a meeting on September 30.

A version of the EC proposals, seen by Reuters news agency, would place a limit on the earnings non-gas fueled providers can make from selling electricity. The proposals would also require fossil fuel companies to share their profits to help provide assistance to the public and businesses facing high prices.

EU diplomats say there is wide support for an earnings limit for non-gas providers. But countries are split over other ideas, including a gas price limit on Russian natural gas. Such a limit was not included in the early EC proposals.

The energy crisis is already heavily affecting Europe's economy, even before the cold winter months arrive.

fund – n. an amount of money saved, collected or provided for a particular purpose

liquidity – n. the fact of being available in the form of money, rather than investments or property

fossil fuels – n. fuels such as coal, oil, or natural gas that are formed in the Earth from dead plants or animals