Get What You Want... With Honey!

Update Required To play the media you will need to either update your browser to a recent version or update your Flash plugin.
By Anna Matteo
30 January 2021


And now, Words and Their Stories from VOA Learning English.

There are many ways to get people to do what you want. 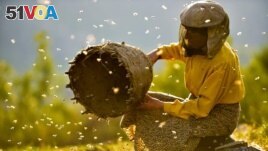 Honey is sweet. Vinegar is sour. What do these two food items have to do with getting what you want?

But these methods might not get the best results and you probably will lose a few friends.

Perhaps being nice to other people is the best and easiest way to get what you want. In fact, we have a saying that describes this way of thinking.

You get more flies with honey than with vinegar.

We should first thank bees for making something as sweet and tasty as honey.

Vinegar can be tasty too. But on its own, it is sour and has a bitter taste. When you mix vinegar with other things, such as oil, it can taste much better. But on its own, vinegar is hard to swallow.

So, the expression "you get more flies with honey than with vinegar" means it is a good idea to be nice to others. You can win over people more easily by being polite and kind.

Being mean or unpleasant is like being full of vinegar. You will push more people away by acting sour or bitter. Nice, polite requests often work better. And in the end, you actually get what you want.

Like many English expressions, you do not need to say the full sentence. Simply saying, "you get more flies with honey" is good enough.

Now, let's hear how to use this idiom in a dialogue.

A: We are way behind on painting this house. If the volunteers don't speed up, we will be painting in the dark!

B: Correction. They will be painting in the dark. I will be at home watching television.

A: Be nice. After all, the volunteers aren't getting paid.

B: Well, that is the definition of a volunteer. But you're right. They should work faster. I'll yell at them some more.

A: Wait. You have been yelling at them?!

A: I put you in charge of the volunteers and you've been shouting at them!?! Have you lost your mind?!

B: Who's the one yelling now. Anyway ... it's the only way to get them to work hard.

A: No! No, it's not! You catch more flies with honey than with vinegar.

B: Well, that may be true. But yelling works too.

A: Not on my project! Now go apologize. And help them paint! And do not be rude or mean.

B: Okay. Okay. Calm down. You don't have to yell or call me names. Didn't you ever hear you catch more flies with ...

A: Don't you even finish that sentence.

And that brings us to the end of this Words and Their Stories. But join us again next week when we will explore another idiom or expression in American English.

boss – v. to give orders to

sour – adj. having an acid taste that is like the taste of a lemon

dialogue – n. a written composition in which two or more characters are represented as conversing

yell – v. to utter a loud cry, scream, or shout

sentence – n. a group of words that expresses a statement, question, command, or wish