Getting News From Around the World With Today’s Front Pages

Update Required To play the media you will need to either update your browser to a recent version or update your Flash plugin.
By VOA
08 July, 2012

We found Todays' Front Pages, a site operated by The Newseum in Washington, DC. The Newseum is a museum that explores news reporting and the media. We visited The Newseum and spoke with its Senior Vice President, Paul Sparrow. 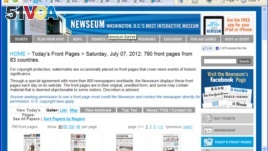 The website displays the front pages of eight hundred thirty-six newspapers from ninety-three countries
PAUL SPARROW: "I think one of the most interesting things about newspapers is that they are a snapshot in time. They capture a moment when the people in that organization, in that newspaper, say ‘these are the most important stories that are affecting our community.' And what that does is that it gives you a lens in which you can look at history from a very specific point of view."

Paul Sparrow says visitors to the website can choose to see all of its newspapers. Or they can look only at newspapers from one area of the world, such as Asia, Africa or South America.

PAUL SPARROW: "One of the things that we do is we allow for people to search by region, so we have a map interface so you can, you know, roll over different areas of the map and you'll see the newspapers from that area. People are very interested in that. We get comments all the time, that ‘Oh its great – put your cursor over anyplace in the world and see the papers from that area.' You can also, we also list them sort of alphabetically by state and then by country. And then we have a gallery layout where you can just look at all the thumbnails and pick the ones that you like based on their visual presentation."

Todays' Front Pages does not archive, or save, front page images. But it does archive newspapers from historically-important dates such as November fifth, two thousand eight. That was one day after Barack Obama was elected president. Again, The Newseum's Paul Sparrow.

PAUL SPARROW: "When you look back at the historical newspapers in our collection, you see these amazing moments where the culture is revealed. If you look at like, in World War Two, the day after the attack on Pearl Harbor, the headline is ‘Japs Attack.' I mean, that's a headline you would just never see in a paper today.

The website shows only the front pages of general-interest newspapers that publish daily. Student newspapers are not displayed. Some papers are not included because they do not have the technological ability to send their front pages electronically to the Newseum. And others simply choose not to do so.

The site displays the front pages of eight hundred thirty-six newspapers from ninety-three countries. It warns that "the front pages are in their original, unedited form, and some may contain material that is deemed objectionable to some visitors."

We have placed a link to Todays' Front Pages on our website, 51voa.com.

If you are in Washington, you can see many front pages from around the world on display inside and just outside The Newseum. Only about ten percent of the front pages the Newseum receives every day are displayed, but all eight hundred thirty-six are available online.