Update Required To play the media you will need to either update your browser to a recent version or update your Flash plugin.
By Alice Bryant
03 June, 2019


At a gold mining site in eastern Ghana, only the sounds of birds and insects break the lasting silence.

Mining equipment stands still, as two Ghanaian companies wait for a new permit – a process that has taken months.

The site sits near the Atewa Range Forest Reserve, an area protected by the government.

Recently, a large amount of dirty waste water spilled over some of the forest's vegetation. It came from a small gold mine that was operating without a government permit. Miners have a term for the waste water: slime. 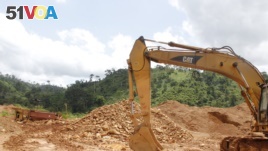 Excavators lie still at a small-scale gold mining site at the foot of the Atewa forest reserve in southeastern Ghana while government officials review the owners' paperwork, May 23, 2019.

Felix Addo-Okyreh works for Ghana's Environmental Protection Agency (EPA). He says the slime is created when gold is separated from soil. Sometimes, the chemical mercury is used to aid the separation process. The resulting waste is then stored locally in dams. Addo-Okyreh says too much rain was to blame for the recent spillage.

"It rained heavily last week. So, the embankment of the dam was weak. and then it got broken, and this is the result."

The slime is toxic, meaning it can harm animals as well as plant life. It landed a few meters away from the Birim, a river supplying water to millions of people in Ghana's capital, Accra.

The government has worked to prevent illegal mining at small gold mines since 2017. The national water company had warned that chemicals released by galamsey could force Ghana to import all its drinking water in the near future.

"Galamsey" is a term used for the country's small, illegal gold mines. It comes from the expression "gather them and sell."

In 2017, the government set up a military task force to stop illegal mining sites and ordered a 20-month ban on all small mining. Satellite technology and digital imaging are being used to more closely watch mining activity.

Yet information released last month shows the rate of deforestation in Ghana increased by 60 percent in 2018. That is faster than any other part of the world. The country lost 1.13 percent of its primary forest last year. That information comes from Global Forest Watch, a program of the World Resources Institute.

Illegal gold mining was partly to blame for the deforestation. Many buyers of Ghana's gold are from China.

Daniel Kwamena Ewur is an officer for the environmental group A Rocha. He said the ban pushed more illegal small miners to operate in the Atewa forest at night when security officials are not working.

"So a lot of youth...went into the forest itself to mine."

Local officials and non-governmental organizations have started training illegal miners to do other kinds of work. They are learning, for example, bee farming and some kinds of cooking. But critics believe individuals performing these activities cannot realistically earn living wages.

One non-believer is Nafi Chinery. She is Ghana country manager for the New York-based Natural Resource Governance Institute.

Chinery thinks the campaign against galamsey has been more about politics than having a real effect on mining. "We don't have enough data about who is actually involved in galamsey," she added.

About 1.1 million Ghanaians were estimated to work in small mines before the ban, which was lifted in December. Such mines are responsible for about 30 percent of the country's yearly mineral production.

Michael Ali is head of mining for Ghana's EPA. He says the government is now taking steps to "sanitize" the gold industry. Its efforts include being more careful with paperwork and restricting the use of mercury.

Ali says the government hopes to reduce illegal mining as much as possible. But ending it completely will require policing by citizens.

The EPA has reclaimed four hectares of illegally mined land around the Atewa forest, near the town of Kyebi. Trees were planted to get community members involved and help meet the target of reclaiming more than 7,000 square kilometers of land by 2022.

The government has said it does not have the money needed to solve the problem. So it is seeking financial support from the international community. In Sagymase, Norwegian donors are financing the reclamation of 2.5 hectares of galamsey land over the next four years.

Daniel Kwamena Ewur is supervising the project, but is careful about planting trees and food crops in soil that has been mixed with chemicals.

There is some amount of mercury in the land, he says. "I would not eat the mangoes that grow here."

Sofia Christensen reported this story for VOA News. Alice Bryant adapted it for Learning English. George Grow was the editor.

site – n. the place where something is, was, or will be located

embankment – n. a raised bank or wall that is built to carry a roadway or hold back water

bee – n. a black and yellow flying insect that is often kept in hives for the honey it produces

sanitize – v. to make something free from dirt, infection, disease or something else by cleaning it