‘Ghosts’ Keep Frightened Indonesians Inside, Away from Coronavirus

Update Required To play the media you will need to either update your browser to a recent version or update your Flash plugin.
By Ashley Thompson
14 April 2020


People living in Indonesia's Kepuh village have recently had some frightening experiences. Mysterious white beings jump out at unsuspecting people on the street. They disappear just as quickly as they appear.

The village on Java island has deployed a group of "ghosts" to patrol, or walk around, the streets. Village leaders hope the ghosts will frighten people enough to keep them inside their homes and safely away from the new coronavirus. 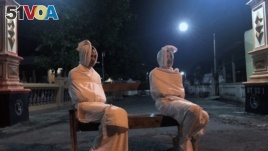 Volunteers Deri Setyawan, 25, and Septian Febriyanto, 26, sit on a bench as they play the role of 'pocong', or known as 'shroud ghost', to make people stay at home amid the spread of coronavirus disease (COVID-19), outside the gate of Kepuh village in Suk

"We wanted to be different and create a deterrent effect," said Anjar Pancaningtyas. He is head of a village youth group that worked with the police on the unusual way of urging social distancing.

Known as "pocong," the ghostly beings usually wear white cloth. Their faces are nearly white, except for a dark substance around their eyes. In Indonesian stories, they represent the trapped souls of the dead.

When the ghosts first started appearing this month, they had the opposite effect of what local leaders had hoped for. Instead of keeping people inside, they brought them outside. Locals hoped to see the pocong for themselves.

The organizers have since changed their methods. They have instead launched surprise pocong patrols, with village volunteers playing the part of the ghosts.

President Joko Widodo has resisted declaring a national lockdown to slow the spread of the coronavirus. He has instead urged people to take part in social distancing and to wash their hands and keep clean.

But some communities have decided to take their own measures. They have put restrictions on people's movements, ordered lockdowns and, in Kepuh's case, used ghosts to frighten people back into their homes.

"Residents still lack awareness about how to curb the spread of COVID-19 disease," said Kepuh village head Priyadi. "They want to live like normal so it is very difficult for them to follow the instruction to stay at home."

There are now over 4,200 confirmed cases of the coronavirus in Indonesia, and over 370 deaths. Observers fear those numbers will rise sharply.

Researchers at the University of Indonesia estimate there could be 140,000 deaths and 1.5 million cases by May without stronger restrictions on movement.

When Reuters reporters recently visited Kepuh village, the supernatural plan seemed to be working. Villagers would run away in fear when the ghosts appeared in front of them.

"Since the pocong appeared, parents and children have not left their homes," said Kepuh local Karno Supadmo. "And people will not gather or stay on the streets after evening prayers," he added.

The Reuters news agency reported this story. Ashley Thompson adapted it for VOA Learning English. Bryan Lynn was the editor.

ghost - n. the soul of a dead person thought of as living in an unseen world or as appearing to living people

deterrent - n. something that makes someone decide not to do something

lockdown - n. a state of isolation or restricted movement as a security measure

residents- n. people who live in a particular place

awareness - n. the state of knowing that something exists

supernatural - adj. unable to be explained by science or the laws of nature : of, relating to, or seeming to come from magic, a god, etc.

prayer - n. words spoken to a god or higher being especially in order to give thanks or to ask for something