Update Required To play the media you will need to either update your browser to a recent version or update your Flash plugin.
By Dan Friedell
13 July, 2016


Donald Trump called for U.S. Supreme Court Justice Ruth Bader Ginsburg to resign, after her critical comments about him.

In interviews with the Associated Press, the New York Times and CNN, Ginsburg spoke about Trump, the presumptive Republican nominee for president. 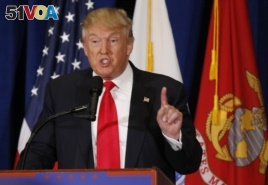 Ginsburg told the Associated Press she did not want to think about the possibility of Trump winning the election. She added with a smile, "It's likely that the next president, whoever she will be, will have a few appointments to make."

Hillary Clinton is the likely Democratic nominee. She will likely run against Trump.

In the New York Times interview, published on July 10, Ginsburg said, "I can't imagine what our country would be with Donald Trump as our president." She also joked about moving to New Zealand.

In a follow-up interview on Monday with CNN, Ginsburg called Trump "a faker" who has "no consistency about him." Ginsburg also criticized Trump for not making his recent tax returns public. Most candidates running for president do this.

Traditionally, Supreme Court justices like Ginsburg do not comment on presidential candidates. They keep their feelings about the candidates to themselves.

One of the reasons is that the Supreme Court is sometimes called upon to help decide an election. That happened in the year 2000, when the results of the election between Al Gore and George W. Bush were not clear.

In response to Ginsburg's comments, Trump said the justice, who is 83, should resign from her position. Ginsburg is the oldest justice currently serving on the highest court in the U.S.

Trump used Twitter to say her comments about him were "dumb," and "Her mind is shot – resign!"

Bernie Sanders, a Democratic candidate for president, said he agreed with Ginsburg's comments about Trump. But the senator from Vermont declined to say whether they were appropriate.

On Wednesday, the New York Times editorial board wrote a column saying it agreed with Trump. The newspaper said it is "vital that the court remain outside the presidential process."

The Washington Post agreed with her comments, but said it would be better if a Supreme Court justice kept her thoughts about the election private.

Ginsburg has also criticized the Republican-controlled U.S. Senate for not acting on President Barack Obama's nomination of judge Merrick Garland. Right now, the court only has eight justices, instead of nine. Justice Antonin Scalia died earlier this year.

Dan Friedell wrote this story for Learning English based on reports from VOANews, AP and Reuters. Hai Do was the editor.

What do you think the justice's comments about Donald Trump? We want to know. Write to us in the Comments Section or on 51VOA.COM.

fake – v. to make something seem true or real in order to trick someone

consistency – n. the quality or fact of staying the same at different times

dumb – adj. not showing or having good judgment or intelligence : stupid or foolish

column – n. an article in a newspaper or magazine that appears regularly and that is written by a particular writer or deals with a particular subject