Update Required To play the media you will need to either update your browser to a recent version or update your Flash plugin.
By Dan Friedell
07 March 2021


Liza Scott is a seven-year-old girl in the southern U.S. state of Alabama. Like many young girls, she became interested in earning money. So, she created a small table where she sells a cold drink made from lemon juice, water and sugar.

This is called a lemonade stand. The stand is at her mother's bakery, a business that sells baked goods like bread. Her mother, Elizabeth Scott, runs Savage's Bakery, near the city of Birmingham.

At first, the lemonade stand was something to do for fun. Liza sold the drinks for 25 cents a glass. She was going to use the money to buy toys and pretty shoes. 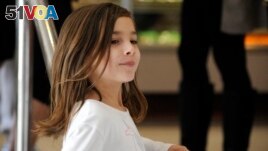 Liza Scott, who is running a lemonade stand to help fund her own brain surgery, holds a donation at her mother's bakery in Homewood, Alabama. (AP Photo/Jay Reeves)

But then the stand became much more important.

Liza has a health problem that will require surgery.

She suffers from seizures because part of her brain did not grow correctly. Doctors in Boston will work to fix the problem during several visits.

Elizabeth Scott said she has good health insurance, which will help pay for some of the treatment. But the trips to Boston will be costly and the insurance will not pay for them.

Now, instead of just being a way to raise money for fun things, the money from the lemonade stand will help pay for the treatment.

Selling cold drinks for less than a dollar will not actually raise much money. So instead, the stand is a place where people can visit to give money that will help Liza with her medical treatment.

So far, people have come to the bakery to buy lemonade and given Liza some extra money, too.

But Elizabeth Scott also created an internet fundraiser where people from anywhere can donate money to Liza. It has gathered over $300,000 so far.

"I can't fund that by myself," Elizabeth said about the extra medical costs for her daughter. She called the costs "pretty exorbitant."

Critics of the U.S. healthcare system say they do not think a child who needs a brain operation should have to raise money to fund her own care.

Liza said she thinks running the lemonade stand makes her feel like she is helping. "It's better than just begging," she said.

The family did not find out about Liza's problem until late January. She had a seizure that lasted 45 minutes, her mother said.

If Liza's brain problem is not treated, doctors say she could suffer a more serious brain injury, like a stroke.

Liza's first surgery will be on March 8, but she could need additional visits for another 25 years.

Liza said she tries not to think too much about her brain problem.

Jay Reeves reported this story for The Associated Press. Dan Friedell adapted it for VOA Learning English. Mario Ritter, Jr. was the editor.

Do you think the little girl should have to raise money for her own surgery? We want to hear from you. Write to us in the Comments Section and visit 51VOA.COM.

seizure –n. an attack in which you might become unconscious and your body moves in an uncontrolled and violent way

insurance –n. an agreement in which a person makes regular payments to a company and the company promises to pay money if the person is injured or dies, or to pay money equal to the value of something (such as a house or car) if it is damaged, lost, or stolen

exorbitant –adj. going far beyond what is fair, reasonable, or expected : too high or costsly