Update Required To play the media you will need to either update your browser to a recent version or update your Flash plugin.
By Kim Varzi and Caty Weaver
14 June, 2012

I'm June Simms. This week on our program we tell about a new blog we just launched...

We also play some break-up songs that you wrote to say were your favorites...

But first, we visit with some American Girl Scouts celebrating the hundredth anniversary of their organization...

(MUSIC)
Girl Scouts' Hundredth Anniversary
JUNE SIMMS: Girl Scouts from around the United States gathered in Washington last weekend to mark the group's one hundredth anniversary. Organizers say over two hundred thousand people attended the celebration. There were Americans from every state, including actress and singer Mandy Moore. Barbara Klein has more. 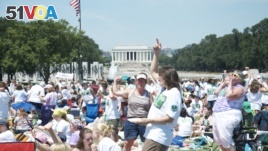 Tens of thousands of young people on the National Mall celebrate the 100th anniversary of Girl Scouts of the United States
BARBARA KLEIN: Girl Scout officials say the first Girl Scout meeting was held on March twelfth, nineteen twelve. That is when Juliette "Daisy" Gordon Low met with eighteen girls from the southern city of Savannah, Georgia. Daisy Low believed that all girls should be given a chance to develop physically, mentally, and spiritually. Brownie Girl Scouts celebrate on the National Mall
Those early Girl Scouts learned to climb mountains and play sports. They also went camping, studied first aid and learned how to tell time by the stars.

Today, many Girl Scouts continue to take part in such activities. Girls at the event last Saturday listed some of the activities they like.

They also talked about why they joined the group.

Girl Scout cookies are an American tradition. Girl Scouts have been selling cookies for over eighty years as a way to raise money for Girl Scout projects. Girl Scouts of the United States says the cookie program is the largest girl-operated business in the country. The organization says selling cookies is a way to help all girls become strong and resourceful citizens.

The girls set goals for how many boxes they plan to sell. They also choose the activities and projects that they want to support. Girl Scouts also donate cookies to American troops overseas, a program called Operation Cookie Drop.
All of the money earned from cookie sales goes directly to the Girl Scout local council that organized the sale. Local councils use some of the money to provide services for Girl Scout programs and events.
However, usually ten or twenty percent of the profits goes back to the individual group that sold the cookies. This money is used for troop projects which differ as much as the Girl Scouts themselves. One Girl Scout group might provide financial support to a needy family. Another group could use the money to buy food for a local animal shelter.

A Girl Scout troop in Arlington, Virginia, used some of their cookie sales to support the celebration on the mall. "We hosted some troops from Kansas, Pennsylvania and Florida," says thirteen-year-old Annaliese Taylor. The money helped pay for their housing, food and registration costs. The fun they shared with other Girl Scouts was free.

JUNE SIMMS: We started something new this week at 51voa.com. We call it "Confessions of an English Learner." It's a place for you to share funny or not-so-funny stories about language misunderstandings.

J.C. Morales from Houston, Texas, remembers an experience after coming to the United States twenty-five years ago. J.C. writes, I was working at a McDonald's restaurant as a manager trainee. We were getting ready to celebrate a birthday for a customer's child. We ran out of balloons for the party, so the store manager asked me to go to a nearby store to buy some "globes" for that purpose. I followed her instructions, and I requested some gloves. When I got back to the restaurant, everybody was laughing at me. I felt ashamed for the misunderstanding. That is very common for non-native English speakers.

Alex from Ukraine also found himself in a misunderstanding, only he was not the one who misunderstood. Alex says, Last summer I visited Los Angeles. When I asked a policeman, "Help me, please, where is the nearest subway station?" he thought that I meant a fast-food Subway restaurant. But I was searching for an underground station.

You can find more stories about misunderstandings and share your own. Go to 51voa.com and click on "Confessions of an English Learner." Or write to mosaic@voanews.com and type "confessions" in the subject line, and please tell us where you are from.

Many people commented on our story about break-up songs. And several of you told us about your own favorite break-up song. Christopher Cruise plays some of them. 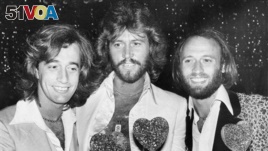 The Bee Gees in 1978
CHRISTOPHER CRUISE: Edgar from Venezuela wanted to hear "How Can You Mend A Broken Heart" by the Bee Gees. This nineteen seventy-one song is especially touching following the recent death of Robin Gibb.
I can think of younger days / when living for my life / was everything a man could want to do / I could never see tomorrow / but I was never told about the sorrow
And how can you mend a broken heart / How can you stop the rain from falling down / How can you stop the sun from shining / What makes the world go round / And how can you mend this broken man / How can a loser ever win / Please help me mend my broken heart / and let me live again

Ben from Thailand wrote that such songs are always beautiful to listen to when two lovers break-up. He added, it's bittersweet, isn't it?

Well, the Hoodoo Gurus sure thought so. Here is the group's nineteen eighty-five hit, "Bittersweet." The song says: God knows. I tried / Tried to hold you with all my might /But time has won / And I could never be that strong.

Kika from Spain wrote to say we must listen to this break-up song from nineteen ninety-three: "Please Forgive Me" by Bryan Adams.

JUNE SIMMS: I'm June Simms. This program was written by Kim Varzi and Caty Weaver, who was also the producer.