Girls on Wheels: Bicycle Programs in India and Kenya

Update Required To play the media you will need to either update your browser to a recent version or update your Flash plugin.
By Alice Bryant
22 November, 2016

In developing countries, attending school can be a daily struggle for some children.

They may walk several kilometers to school because their families do not have money to send them on buses or other forms of transportation.

With schools far away, and little money to pay for transport costs, parents worry about the safety of their children walking to school.

So, a number of parents keep their children at home. Or the child drops out of school: they leave without completing their studies.

These and other barriers to school attendance are the reality for many girls in poor countries.

But now, programs in two developing countries are helping to change that. The programs are giving girls "pedal power" -- transportation in the form of bicycles.

Power of the pedal

Rural areas of poor countries often have few secondary schools. So, it is common for students there to travel great distances to attend classes.

Bihar is the poorest state in India. Ninety percent of the state's population lives in rural areas.

Until 2007, too many teenage girls in Bihar were dropping out of school. For Nahid Farzana, her home was 6 kilometers from school. And, her father did not have money for bus fare, she told the Associated Press.

But, that same year, the state government began offering bicycles to girls to help them get to school. The program has been so effective that three nearby states are now doing the same.

And the results are measurable. A 2014 study found that giving bicycles to teenage girls in India increased their secondary school enrollment by 30 percent. It also helped many of them stay in school long enough to take their final exams.

Western Kenya is experiencing success with a similar program. Until recently, there was a high risk of local girls dropping out of school and then becoming pregnant.

Loise Luseno is a 16-year-old girl from Kakamega, Kenya. In the past, she had to walk about 10 kilometers to reach school. Last year, she dropped out temporarily because of the distance. 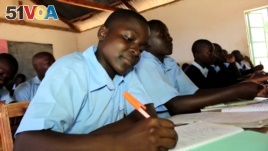 Members of her family work as subsistence farmers. They earn just about $30 a month -- not nearly enough for food, school costs and transport.

But, a few months ago, Luseno went back to school – this time on a bicycle. Her new form of transportation was provided by World Bicycle Relief, an American-based group.

Christina Kwauk is an expert on girls' education at the Brookings Institution, a research organization in Washington, D.C.

Kwauk recently told VOA that, in many countries, girls face a long list of barriers to school attendance.

Sometimes, the issue is that a society has firm ideas about what girls "can and shouldn't do as they become young women," including whether they should receive an education.

Luseno experienced this. When girls in her community walked to school, motorbike riders would stop them on the road. They would offer the girls rides to school. Then, they would try to persuade the girls to drop out.

Kwuak says another reason girls may not attend school is their family. Parents might believe that losing children's help at home can cause the family to lose money.

For example, a poor farming family grows less food without the help of children. Girls are often expected to do this work. In many cases, those household duties include taking care of younger brothers and sisters.

There are also direct financial barriers, says Kwauk, such as school fees, books, and meals. So, in places where families value boys more than girls, and parents have little money, the boys are sent to school.

The ups and downs

Even with the success of the bicycles programs, there are still problems.

Ainea Ambulwa teaches at the Bukhaywa secondary school in Kakamega, Kenya. He belongs to a bicycle supervisory committee at the school. He makes sure that the riders are keeping their vehicles in good condition.

He says that some families will put heavy things on the bicycles and then they break down. Because the family lacks the money to have the bike repaired, the girl can no longer get to school.

World Bicycle Relief is based in Chicago, Illinois. It provides bicycles through another group: World Vision.

In 2015, the two groups launched a bicycle production factory in Kisumu, Kenya. The cost of the bicycle is around $180. That is too much money for most families in rural Kenya. 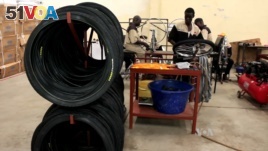 But with the help of donors, the program has given away about 7,000 bicycles throughout the country. Most of the people receiving the bikes are girls.

Bicycles decrease the safety risks for girls because the girls get to school quicker, Kwauk explains. It also helps parents not to lose work time taking their girls to school.

Peter Wechuli, the head of the program in Kenya, says the bikes have improved children's lives. But, he says, the factory was built around 100 kilometers from Kakamega. So, getting the bicycles to needy families can be a problem.

Yet Kwauk calls the bicycle programs "very promising" and a low-cost solution. She says many organizations in wealthier countries would be happy to provide this kind of resource.

Lenny Ruvaga reported this story from Kenya for VOANews. Alice Bryant adapted his report for Learning English. She also spoke with Christina Kwauk. George Grow was the editor.

drop out - v. to stop going to school before finishing

pedal - n. a flat piece of metal or rubber that you push with your foot to make a machine (such as a bike) move, work, or stop

fare - n. the money a person pays to travel on a bus, train, boat, or airplane or in a taxi

enrollment - n. the act or process of entering something (such as a school) as a participant

subsistence - adj. a word describing the amount of food, money, etc., that is needed to stay alive

hurdle - n. something that makes an achievement difficult

fee - n. an amount of money that must be paid

bump - n. a small raised area on a surface