Update Required To play the media you will need to either update your browser to a recent version or update your Flash plugin.
By Phil Dierking
25 November, 2016


This week in our travels through America's national parks, we revisit the state of Alaska. The northernmost state is home to eight major national parks.

Today, we visit one of its most famous parks – Glacier Bay. This huge park in the southeastern part of the state covers more than 1 million hectares of Alaskan wilderness. It includes mountains, glaciers, fjords, and even rainforests.

Glacier Bay supports hundreds of kinds of animals, including many species of birds, fish, bears, whales and sea lions.

As its name suggests, much of Glacier Bay National Park is covered by glaciers. A glacier is a large area of ice that moves slowly down a slope or valley, or over a wide area of land. Glaciers cover more than 5,000 square kilometers of the park.

Glacial ice has shaped the land over the last seven million years. The glaciers found in the park today are what remains from an ice advance known as the Little Ice Age. That period began about 4,000 years ago.

During the Little Ice Age, the cold weather caused the ice to grow and advance. That growth continued until the 1700s, when the climate began to warm. The hotter temperatures caused the ice to start melting. That melting led the huge glacier to separate into more than 1,000 different glaciers. 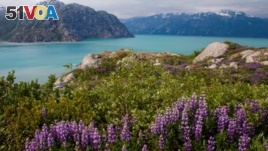 The extremely tall and jagged mountains seen in Glacier Bay National Park were formed by the ice advancing and then melting over time. The melting of the ice also created water that filled in and created the many fjords within the park. Fjords are narrow parts of the ocean that sit between cliffs or mountains.

The huge amounts of water from the melted ice killed off many kinds of plants. Vegetation returned to the area over the next 200 years. The regrowth in plants also brought back many animals to the land. This return of life to Glacier Bay is why it is sometimes called "a land reborn."

A people of tradition

There is evidence that people have lived in the area for several thousands of years. Glacier Bay is the homeland of the Huna Tlingit people. The Tlingit are an Alaskan Native tribe. They live throughout southeastern Alaska. They began settling in the Glacier Bay area after the last ice age, once the glaciers began to retreat. 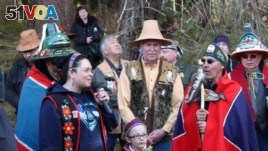 Today, the Tlingit people live a modern life. But they also practice traditions unique to their culture. In the past, the Huna Tlingit harvested gull eggs every year. Gulls are large gray and white birds that live near the ocean. Gull eggs are an important type of food for the Huna Tlingit. Family harvest trips served as a way to keep ties with their homeland and to pass on stories, moral codes, and cultural traditions to the younger generation.

In the 1960s, the Migratory Bird Treaty Act forced them to stop collecting gull eggs.

Together with the National Park Service, however, they have worked to create a sustainable way for them to continue practicing this tradition.

One of the first major expeditions to the area took place in 1794. Lieutenant Joseph Whidbey arrived near Glacier Bay aboard the HMS Discovery, a British Royal Navy ship. The expedition was led by Captain George Vancouver.

At that time, the bay was still almost completely filled with ice. The crew described the scene as "a compact sheet of ice as far as the eye could distinguish." 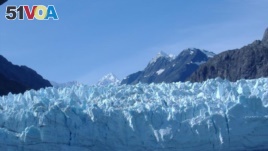 The large ice wall created by the front of a Glacier

In 1879 the naturalist John Muir visited the area to do research. He found that glacial ice had melted back almost 50 kilometers, and had formed a bay.

After his visit, Muir and other conservationists urged Congress to protect this special area.

In 1925, President Calvin Coolidge made Glacier Bay a national monument. It did not become an official national park, however, until 1980.

In 1992, Glacier Bay became part of a huge World Heritage Site along the border of Canada and the United States. The 9.7 million-hectare site is the largest internationally protected area in the world.

One-fifth of Glacier Bay National park is ocean water. And, no point within the park is more than 50 kilometers from the coast. Most animals living here depend on the water or shoreline.

Glacier Bay is home to brown bears and black bears. They are found in the forests, as well as along the coastline. They feed on berries and plants found in the woods. They also feed on the fish found in the waters.

Humpback whales also feed on fish in Glacier Bay's waters. Whales are large mammals that live in the ocean. Humpbacks can weigh more than 35,000 kilograms. They come to Glacier Bay every summer for one main reason: food. They feed on small fish in the water. They eat more than 450 kilograms of food each day. They remain in Glacier Bay for about five months each year. 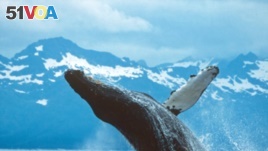 There are also 281 species of birds in Glacier Bay. These include gulls, guillemots, puffins, murrelets, and cormorants. Many of these birds make nests on cliffs. They eat small fish and other sea life.

Glacier Bay is a popular place for people searching for adventure. Some visitors choose to explore the park by kayak. The small, narrow boats offer visitors a chance to experience the park's many fjords and its hundreds of kilometers of coastline. 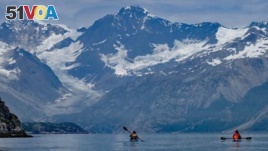 Hiking and camping are also popular activities in the park. But, hikers and campers must have respect for the harsh and remote environment. Weather and water conditions can be extreme. Food can also be limited in this area. There is only one official campground, located in Bartlett Cove. But camping is permitted along any of the shores or forests found in the park. This kind of camping is called backcountry camping.

Another popular way to visit the park is by boat or ship. Cruise ships and tour boats make regular trips into the park. Passengers are able to see the park's glaciers up close. These glaciers are always changing. Visitors may witness huge pieces of ice breaking apart from the glacier. This is known as "calving." When the ice falls into the water, it creates a loud, thunder-like noise.

From glacial fjords to mountain peaks, Glacier Bay holds some of the continent's most awe-inspiring natural wonders. It is a land reborn, and a place that continues to change with time.

Phil Dierking wrote this report for Learning English, with materials from the National Park Service. ­­­­­Ashley Thompson was the editor.

Who do you think should control public lands? We want to hear from you. Write to us in the Comments Section or on 51VOA.COM.

bay – n. a large area of water that is part of an ocean or lake and partly surrounded by land

compact – adj. closely or firmly packed or joined together

fjord - n. a narrow part of the ocean between cliffs or steep hills or mountains

inspiring – adj. causing people to want to do or create something or to lead better lives

jagged – adj. causing people to want to do or create something or to lead better lives

kayak – n. a long narrow boat that is pointed at both ends and that is moved by a paddle with two blade

naturalist – n. a person who studies plants and animals as they live in nature

retreat – v. the act or process of moving away

unique – adj. something or someone is unlike anything or anyone else