International Agencies Worry US Aid May Be Linked to Abortion Ban

Update Required To play the media you will need to either update your browser to a recent version or update your Flash plugin.
By Christopher Jones-Cruise
16 May, 2017


A measure called the "Presidential Memorandum Regarding the Mexico City Policy" will likely affect the lives of many women in developing countries.

The memorandum was among the first executive orders signed by Donald Trump after he became president of the United States. It changes government policy about the way foreign aid is given to other countries.

With the order, Trump brought back a rule that bans the use of foreign aid by international organizations that support abortion. It is called the Mexico City Policy. 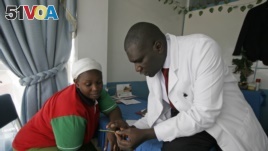 This policy dates back to 1984, when Ronald Reagan was the U.S. president. He announced it at a population conference in Mexico City. Under the policy, international organizations are barred from using foreign aid to pay for a medical operation to end a pregnancy.

Since then, this rule has been put in place when a member of the Republican Party is president. It is cancelled when a Democrat becomes president.

Melissa Israel is with The Heritage Foundation, a conservative policy group in Washington, D.C.

"The guiding principle for our policy really needs to be rooted in the respect for the most important fundamental human right of all, and that's the right to life."

The policy change was expected when Republican Donald Trump became president. But observers did not expect him to expand the rule.

Amanda Klasing is a researcher at Human Rights Watch, which opposes the policy.

"He (Trump) expanded it to include about 9.5 billion dollars' worth of US funding on Global Health, so that includes HIV funding, maternal and child health, nutrition (and) prevention of childhood diseases."

For non-profit groups to receive U.S. aid, they must not perform abortions or provide any information about them, even if they use their own money for abortion services.

Klasing says the expansion of the Mexico City Policy will prove harmful to women's health.

"It means that when a doctor sits down with a woman, if she has a health complication and she's entitled under her local law to access a safe abortion, that doctor cannot give her (a) referral or provide her information she needs to take care of herself."

The World Health Organization says there are about 56 million abortions every year. More than half of the operations take place in developing countries.

In Kenya, Liza Muringo Kimbo is the director of IPAS Africa Alliance. The alliance says it is "a global nongovernmental organization dedicated to ending preventable deaths and disabilities from unsafe abortion."

Other countries have begun to take steps to reduce the effects of the U.S. policy. In The Netherlands, people have created a program called the She Decides. And, in Britain, there are plans for a conference called Family Planning 2020. Both efforts will try to bring together countries that provide aid and countries that need it.

abortion – n. a medical operation used to end a pregnancy and cause the death of the fetus

principle – n. a moral rule or belief that helps you know what is right and wrong and that influences your actions

rooted in – phrasal verb to form, make or develop (something) by using something as a basis

HIV – n. a virus that causes the disease AIDS (HIV is short for "human immunodeficiency virus.")

referral – n. the act of sending someone to another person or place for treatment, help or advice

dedicate to – phrasal verb to use time, money or energy for something