Update Required To play the media you will need to either update your browser to a recent version or update your Flash plugin.
By VOA
01 September, 2014
51VOA听写整理，转载请注明出处。文本仅供参考，欢迎纠错！

Climate researchers met recently in Cameroon to talk about threats to Africa's land and animals. They said they believe the continent may lose as much as 30 percent of its animal and plant species by the end of this century. They blame the expected losses on the warming of earth, population growth and unrestricted development.

The researchers represent 20 African, American and European universities. They say countries south of the Saharan desert are losing forest faster than any place on earth. Wood companies are cutting down trees to meet growing demand from China, Europe and the United States. 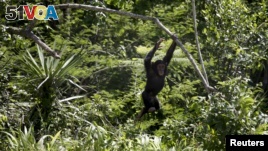 The population is growing at 3 percent per year. There are now homes, factories and farms on land that once was forest. Many African animals and plants no longer have a place to live as result. Climate change also continues to threaten species.

Thomas Smith is the director of the Center for Tropical Research at the University of California.

"With a 1.5 degree rise in global temperature, Africa may lose 30 percent of its animals and plants. And unfortunately with the increase in CO2 that has been now estimated to be up to three degrees in terms of rising global temperatures --  that means we may lose 40 percent of all mammal species in Africa by the end of the century," said Smith.

The African chimpanzee is one such animal at risk. Mary Katherine Gonder is a professor in the Department of Biology at Drexel University in Philadelphia, Pennsylvania.

She studies chimpanzees in the Congo Basin. She says the forest home is disappearing. She also says hunters continue to kill the animals to sell as food.

Thomas Smith of the University of California says it's possible to develop Africa and care for the environment at the same time.

"With these enormous challenges, we need to develop green economies. We need to make sure that the development we do is sustainable. For example, we are working with parties here to develop new ways of providing green jobs, for example areas that you can preserve, [like] forests, and at the same time produce crops that are appropriate for people to sell and to eat. So we need to be thinking about how to preserve the natural processes and at the same time provide for the economic needs of the country," said Smith.

The Congo Basin area of western and central Africa has the second largest equatorial rain forest in the world. It is important to lives of millions of people.