Update Required To play the media you will need to either update your browser to a recent version or update your Flash plugin.
By Mary Gotschall
22 January, 2016


The International Labor Organization (ILO) predicts global unemployment will worsen over the next two years.

Emerging and developing countries will be hurt the most. This is according to an annual study released by the ILO called "World Employment and Social Outlook – Trends 2016."

The ILO found that nearly 200 million people were unemployed at the end of last year. This was nearly 30 million more than in 2007, before the world financial crisis.

The global financial crisis started in the United States with bank failures, defaults on home mortgages, and credit card payments. Many layoffs followed. It spread globally. 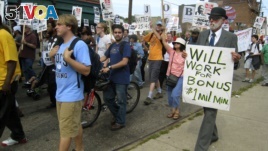 Protesters called on global leaders to do more to create jobs for the growing number of unemployed in the United States and globally, at a peaceful march in Pittsburgh, Pennsylvania, September 20, 2009.

"The crisis affected almost every part of the world," according to Yale Global Online, a publication of Yale University.

The ILO predicts that more than 2 million more people will be out of work by the end of this year. That will mean 200.5 million unemployed worldwide by the end of 2016.

Guy Ryder is ILO Director-General at their headquarters in Geneva, Switzerland. He says the slow growth of the world economy is not creating enough jobs to reverse the increase in high unemployment in the world.

Brazil, China and the oil-producing countries will be particularly hard-hit by the weakened job market, according to Ryder.

The report says job quality remains a major challenge. About 1.5 billion people are working in vulnerable jobs, according to the report.

This includes people who are self-employed or who work in the informal sector. This type of work usually has low productivity, low pay and no social protection. The ILO found that countries in southern Asia and sub-Saharan Africa have the highest levels of vulnerable employment, peaking at 74 percent and 70 percent, respectively.

The report says governments must make employment policies stronger and put in place protection for workers. They say more attention needs to be paid to helping people find decent work.

This includes young people, women, the long-term unemployed, and the disabled.

outlook – n. a set of conditions that will probably exist in the future: the future of someone or something

default – n. a failure to make a payment (such as a payment on a loan)

layoff – n. the act of ending the employment of a worker or group of workers

productivity – n. the rate at which goods are produced or work is completed

strengthen – v. to make (someone or something) stronger, more forceful, more effective, etc.

excessive – adj. going beyond what is usual, normal, or proper

inequality – n. an unfair situation in which some people have more rights or better opportunities than other people