The surgery looked like any other operation to remove a tumor. When doctors turned off the lights, however, parts of the patient's chest started to glow. A spot over his heart shined purplish-pink. Another spot lit up in his lung.

Doctors at the Hospital of the University of Pennsylvania were using dyes that glow in the dark to help find cancer. 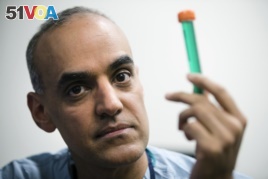 Surgeon Dr. Sunil Singhal poses for a photograph with a vial of fluorescent dye

Dr. Sunil Singhal at the Philadelphia hospital told the Associated Press that using glowing dyes is a big aid during surgery.

"We can be sure we're not taking too much [tissue] or too little," he said.

The new dyes are experimental. There are several long-term studies that are aimed at getting the approval of the Food and Drug Administration.

The drug company Johnson & Johnson recently invested $40 million in a method that uses one of the dyes. Money from the federal government also has supported some of the work.

Paula Jacobs, an imaging expert with the National Cancer Institute, said the new dyes will improve patients' lives. She predicts that many dyes will be available within five years.

Glowing cells are easier to see

Singhal said he thought of the idea of glowing cells 10 years ago. He was thinking of a student who had died of lung cancer. He had operated on the student but was not able to remove all the cancer cells. He was lying next to his baby looking at glowing stars placed on the ceiling.

He said, "I looked up and saw all these stars on the ceiling and I thought, 'how cool if we could make cells light up' so people would not die from unseen tumors."

The dye used in one of the experiments is called ICG. It has been used for medical purposes for a long time.

Singhal found that when large amounts of the dye were put into the blood of a patient before surgery it would collect in cancer cells. When the cells are exposed to infrared light, they glow.

He calls the dye TumorGlow. Singhal has been testing it for lung, brain and other kinds of tumors.

Singhal also is testing a dye for On Target Laboratories based in the state of Indiana. The dye binds to a kind of protein that is common in cancer cells. It is being tested on ovarian cancer and lung cancer.

Martin Low is Chief Executive for On Target Laboratories. He said each year, about 80,000 Americans have operations because of suspected cancer spots in their lungs. But if doctors can confirm that a cancer only affects a small area, they can remove less tissue rather than a large part of the lung.

Dr. Sunil Singhal, second from right, directs a special camera to view a tumor in his patient made visible with a fluorescent dye, seen at monitor on right, at the Hospital of the University of Pennsylvania in Philadelphia, Tuesday, Jan. 23, 2018

Dr. J. Leonard Lichtenfeld is with the American Cancer Society. He said dyes might be most useful for breast cancer. He said up to one third of women who have a lump removed need a second operation because the cancer was not fully removed.

Kelly Londy leads Lumicell, a company in Massachusetts. Her company is testing a device that uses dye to look for cancer cells in lumps suspected of breast cancer. She said when additional operations are avoided "the impact is huge."

Dr. Barbara Smith is a breast surgeon at Massachusetts General Hospital. She is leading a study of Lumicell's sytem in 400 breast cancer patients.

She said in an earlier study of 60 women, Lumicell's device and dyes showed all cancers that were verified by tests on tissue later. However, it incorrectly identified cancer in more than one in four cases, Smith said.

She added that, "you would rather take a little extra tissue with the first surgery rather than missing something and have to go back."

Dye being tested on other cancers

There are companies testing dye-based methods on other cancers.

A company called Blaze Bioscience in Seattle, Washington is testing a system called Tumor Paint. The method uses a molecule that binds to cancer cells and a dye that makes it glow.

Studies for skin, brain and breast cancer in adults and brain tumors in children have been done.

Another company, Avelas Biosciences uses a similar method using a molecule that carries the dye to a tumor cell. The company said it is completing early studies of breast cancer, but plans to test the method on colon, head, neck, ovarian and other cancers.

Carmine Stengone is the president of Avelas Biosciences. He said making cancer surgery better is important.

"This was just an overlooked area, despite the high medical need," he said.

He notes that while much is being done to develop new cancer drugs, ways to make surgery more effective have not received a lot of attention.

Mario Ritter adapted this Associated Press story for VOA Learning English. Hai Do was the editor.

dye –n. a substance that changes the color of something

glow –v. to shine with a low light

tumor –n. a mass of cells that are not normal

detect –v. to find, to discover

impact –n. a result, something that makes a difference

patented –adj. a device or process that has received official recognition for ownership rights and can be sold only by the holder of those rights

verify –v. to prove, show, find out, or state that (something) is true or correct