Update Required To play the media you will need to either update your browser to a recent version or update your Flash plugin.
By VOA
20 July, 2015


The price of gold fell to its lowest level in five years in trading early Monday. For a time, gold was selling at less than 1,100 dollars an ounce on Asian markets.

Some traders are calling the price drop a "mini flash crash." Thirty billion dollars in short selling took place within half an hour during what are known as "stop-loss" selloffs. Traders executed sell orders when gold prices reached targets set by investors.

Luke Chua is sales and operations manager at Bullion Star, a Singapore business that sells gold and other precious metals. 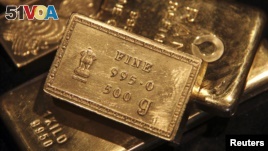 FILE - Gold bars are displayed at a gold jewelry shop in the northern Indian city of Chandigarh. (REUTERS/Ajay Verma )

"In the physical market, this would not be possible because that would consume a whole lot of physical gold. But in the futures market, because it's all digital as long as you find a buyer to bid for it, then that would be possible."

Some observers were wondering about China's possible involvement in the short-selling of gold Monday. China is the world's largest producer of gold. On Friday, the country said its supplies had increased by 59 percent to 1,658 tons as of the end of June.

Trader Luke Chua in Singapore says that should have driven up the price.

Some observers note China's increase in gold reserves was smaller than expected. But they admit that does not fully explain the intense speculative trading early Monday morning.

Gold prices are now six percent lower compared to prices one year ago.

Metals traders say they expect gold prices to remain around the current level. They also could move still lower because of possible action by the United States Federal Reserve. The U.S. central bank is expected to increase interest rates later this year. That would lead many investors to take their money out of gold and other metals and to buy U.S. government bonds instead.

Steve Herman reported this story for VOA. George Grow adapted it for VOA Learning English. Mario Ritter was the editor.

flash – adj. relating to something that appears, moves or passes very quickly

short selling –n. a kind of trade in which an investor makes a profit by selling an asset at a higher price and buying it back at a lower price

precious – adj. worth a lot of money; valuable

consume – adj. to use; to destroy something with fire

reserves – n. supplies of something