Update Required To play the media you will need to either update your browser to a recent version or update your Flash plugin.
By Ashley Thompson
11 January, 2016

"The Revenant" and "The Martian" were the night's top winners, with three Golden Globes each.

The film "The Revenant" is about a man in the 1820s trying to survive in the wild after being attacked by a bear. It won the prize for Best Dramatic Film. "Revenant" star Leonardo DiCaprio won best drama actor. The film's director, Alejandro Gonzalez Inarritu, won best director. Inarritu also won best director last year for "Birdman."

"The Revenant" beat out "Carol," a lesbian romance story, and "Spotlight." That drama was based on the reporters who investigated widespread sexual abuse by Roman Catholic priests. 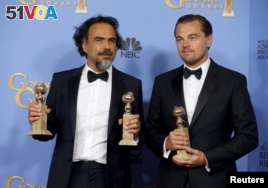 Another top winner, "The Martian," tells the story of an astronaut trapped on Mars. It won the best motion picture in comedy or musical. Director Ridley Scott said he was confused by the film's nomination in that category.

"Martian" star Matt Damon took home the award for best actor in a comedy or musical. He said he knew "how lucky I am to do this for a living."

Rising star Brie Larson won best actress in a drama for her role in "Room." In that film, she plays a young woman who is kidnapped and held for years with her young son. Jennifer Lawrence won best comedy actress for "Joy," about the inventor of the Miracle Mop.

Other top winners included Sylvester Stallone, who received a standing ovation as best supporting actor for the film "Creed." In "Creed," Stallone returned to his role as boxer Rocky Balboa.

"The Son of Saul," a Hungarian about the Holocaust, won for Best Foreign Language film. It was Hungary's first time to win the award. "The Son of Saul" also won the Grand Prix at this year's Cannes Film Festival.

The Golden Globes are selected by the Hollywood Foreign Press Association. They mark the first major film honors of the Hollywood awards season. Comedian Ricky Gervais hosted this year's show.

The Golden Globes is considered a preview of the Academy Awards, Hollywood's biggest night. Many Golden Globe winners go on to win Oscars weeks later. Oscar nominees will be announced on January 15.

The Golden Globes is also the only major awards show that honors both film and television. In the television category, "Mr. Robot" won for best TV drama series. The series follows a young man who works in cyber-security by day, and cyber-hacking by night.

Ashley Thompson adapted this story from Reuters and VOA News reports. Caty Weaver was the editor.

standing ovation - n. an occurrence in which the people at a play, speech, sporting event, etc., stand up and applaud to show enthusiastic approval or appreciation