Update Required To play the media you will need to either update your browser to a recent version or update your Flash plugin.
By Kelly Jean Kelly
01 May, 2019 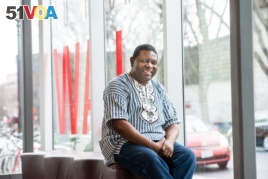 Alfred Brownell, a lawyer from Liberia, is one of the prize winners. The foundation says that, in 2011, he noted severe damage to a tropical rain forest in his country. The Upper Guinean forest is home to many kinds of animals and an important place for carbon, which is stored in plants. The Goldman Environmental Foundation has called Liberia's forests "the lungs of West Africa."

Alfred Brownell found that machines were taking down trees. Water was becoming polluted. Even some burial grounds were getting destroyed.

Brownell blamed the damage on a company that signed a deal with Liberia's government to develop palm oil operations on the land. He also blamed the government officials who supported the project. In answer, he worked with people in the community to object formally. Their efforts forced the company to stop work. In time, they saved about 50 square kilometers of forest, along with some of the elephants, pygmy hippopotamuses and other animals that live there.

Alfred Brownell and community members clashed repeatedly with company officials and police over the issue. Brownell and his family have since fled Liberia. They now live in the United States.

Yet his work has had an ongoing effect in Liberia. The palm oil farm's developers say they are trying to improve land-clearing practices. And an official in the current government says Liberia has stopped permitting businesses from expanding into the country until all the international requirements are met.

Another 2019 Goldman Environmental Prize winner is Alberto Curamil. He is part of the Mapuche community, a group of people who have historically lived in central Chile. Many depend on rivers in the area to earn their money. The group considers the rivers holy.

But a few years ago, the Chilean government moved to build large hydroelectric projects on the rivers. Officials planned to work with two private companies to control the water flowing in the rivers and use it to make energy instead. The plan risked damaging the native plants and animals.

In answer, Curamil organized a large protest and legal campaign. He brought together native peoples, environmental groups, researchers and others. Their efforts persuaded the government to cancel both projects.

And in the United States, Linda Garcia worked to stop plans to build an oil export terminal in her community. Garcia lives near the Pacific Ocean, in the western state of Washington. Businesses wanted to send oil, coal and natural gas on trains through a river valley to her town. From there, ships could export the fuels overseas.

But Garcia worried the plan would damage the river valley and create more air pollution. She was also concerned about possible explosions a train accident would cause.

Garcia was not physically well and faced opposition to her ideas. But she joined with private citizens and government officials to launch a campaign against the plan. Their efforts brought attention to the environmental effects of the proposal. In January last year, the developers were forced to cancel the project.

The other Goldman Environmental Prize winners are from North Macedonia, Mongolia and the Cook Islands. Together, they have helped protect endangered animals and sea creatures.

Kelly Jean Kelly wrote this story for Learning English, based on reports from the Associated Press and Goldman Environmental Foundation website. George Grow was the editor.

ordinary - adj. normal or usual : not unusual, different, or special

tropical rain forest - adj. a tropical forest that receives a lot of rain and that has very tall trees

lungs - n. the two organs that people and animals use to breathe air

practice - n. something that is done often or regularly

terminal - n. a building where buses or trains regularly stop