Update Required To play the media you will need to either update your browser to a recent version or update your Flash plugin.
By Dan Friedell
23 February 2021


American professional golfer Tiger Woods was seriously injured on Tuesday in a car accident while driving near Los Angeles, California.

He was taken to the hospital and was undergoing surgery for leg injuries, recent reports said. Rescue workers used a tool known as "the jaws of life" to take him out of the car.

The Los Angeles County Sheriff's Department said Woods' car rolled over. His car was the only one involved in the crash. 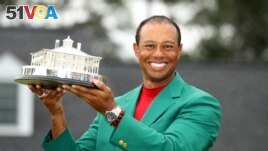 Tiger Woods of the U.S. celebrates with with his green jacket and trophy after winning the 2019 Masters. He was injured in a car accident on February 23, 2021. (REUTERS/Lucy Nicholson)

Mark Steinberg is Woods' manager. He confirmed the accident, and said: "He is currently in surgery and we thank you for your privacy and support."

A television news helicopter flew over the area and recorded video of a car on its side with heavy damage. The Los Angeles Times reported the car rolled over "several" times and Woods was not able to get out of the car on his own.

Woods, 45, is one of the most successful professional golfers of all time. He has won 15 major championships and most recently won The Masters in 2019 after missing a good deal of time recovering from a back injury.

Woods recently had another back surgery and he said he was not sure if he would be ready to play in this year's Masters in April.

The last time Woods played was in a tournament with his 11-year-old son Charlie, in December.

Stefanie Dazio wrote this story for the Associated Press. Dan Friedell adapted it for Learning English. Mario Ritter, Jr. was the editor.

Do you think Tiger Woods will be able to recover from his accident and play golf again? We want to hear from you. Write to us in the Comments Section and visit 51VOA.COM.

surgery - n. medical treatment in which a doctor cuts into someone's body in order to repair or remove damaged or diseased parts

jaws of life –n. the name of a rescue took used to break open a door that is stuck

privacy –n. the state of being away from public attention